I will not beat around the bush: São Paulo was my favorite city in Brazil. Although Bonito enchanted me with its natural beauty, Foz do Iguaꞔu impressed me with the power of nature – São Paulo is the place I see myself live and work and be part of the cool, artsy crowd.

Talking ’bout cool, artsy crowd: I decided to let one of the most glorious sons of São Paulo guide you through the city – let’s hear it for Mr. Eduardo Kobra!

Eduardo Kobra was born in 1975 in São Paulo and is one of world’s most recognized muralists. His huge, very expressive works are found in the US – and of course in Brazil. I introduced his pentaptych ‘Ethnicity’ that he has painted on the occasion of the Olympics in Rio in 2016.

His kaleidoscope-ish portraits are – well, rather hidden than found – all over São Paulo, and not only do I lead you to the walls, at the same time I point out attractions and points of interests in their surroundings.

So lets go, we start right at the airport:

Like most bigger cities in Brazil, São Paulo has two airports, too: Guarulhos International, located 30 km / 19 mi north east of the city center, and Congonhas which is in the city and can be reached in about 30 minutes by public transport.

If you are coming to São Paulo by bus, you’ll arrive at the Rodoviária do Tietê from where you get to the center by either bus or subway in about 20 minutes.

If you find a reasonably priced hotel around the subway station Consolaꞔão/Paulista, go for it: it’s centrally and conveniently located. I stayed at the Rua Augusta (check the CONCLUSION and RATING page for details) which is the off-scene theater and clubbing district, however, the hotel was very quiet, very comfortable, yet reasonably priced. I can only recommend it.

Wanna follow my route? I’ve marked all the Kobras on this map – and for your convenience all the other spots mentioned in this post, too.

Although there is a ‘center’, São Paulo’s lifeline is the Avenida Paulista, stretching from Praꞔa Marechal Cordeiro de Farias all the way to the subway station Paraíso.

So let’s get started at the Paulista’s western end close to the subway station Consolaꞔão where Kobra painted the great Brazilian racing driver Ayrton Senna, who died in 1994 at the age of 34 at the San Marino Grand Prix.

Especially in the evening you should turn left into the Rua Augusta, the city’s vibrant party and entertainment street full of restaurants, bars, theaters, clubs and fun and follies.

Four blocs further is one of the best art museums São Paulo has to offer, the Museu de Arte de São Paulo. Besides their own collection of modern art, they organize inspiring exhibitions. For art-lovers, a visiting this venue is a must.

Another three blocs down, to your left on Alameda Joaquim Eugênio de Lima, a nice surprise is waiting for you: a brandnew Kobra – I even saw it in the making beginning of 2018!

Keep walking – whereby if you don’t like to walk, you can hop on one of the buses going down the Paulista or even take the subway. The disadvantage is that in Brazil you pay one price per ticket, i. e. it doesn’t matter if you go just to the next stop or across town – you always pay the same price (which is 3,60 R$ (about 1 US$)).

Getting to the end of the Paulista means getting to the highlights – of the Kobras as well as of the attractions: concentrated behind the subway station Brigadeiro, you’ll find the Capela Santa Catarina to your left.

Now, don’t you miss one of the most important Kobras right behind this building depicting another Brazilian art hero, namely star-architect Oscar Niemeyer!

You might get an even better look from the last attraction, located on the other side of the road, the romantic Casa das Rosas.

The Casa das Rosas – the house of roses – is a culture center organizing exhibitions, concerts and much more. It’s always worth it to drop in and check out what’s on.

The exhibitions are open from Tuesday to Saturday from 10 a. m. to 10 p. m., Sunday to 6 p. m. Regarding other activities, please check their website.

Once you are close to the Brigadeiro station, let’s visit some more Kobras – and some other fantastic venues. But I have to warn you: We are going to the Parque Ibirapuera, where especially on weekends many São Paulians are strolling with their families, walking their dogs, or jogging by themselves.

Take any bus going down the Avenida Brigadeiro Luís Antônio and tell the driver you want to get off close to Praça Armando de Sales Oliveira.

Here you can admire the Monumento às Bandeiras, created in 1954 by Victor Brecheret, an Italian-Brazilian sculptor, commemorating the settling expeditions into the inner Brazil in the 17th century.

Now cross the Avenida Pedro Álvares Cabral and you’ll find yourself at one of the nicest places in  São Paulo, the Parque Ibirapuera.

Ibirapuera is only city’s second largest park (in case you wonder: the largest one is Parque Anhanguera in the northern part of the city), however, it spreads over 2 qkm / 0.8 sq mi and besides its lush meadows, trees, and flowers as well as creeks and lakes, there is much to see even for those who are oblivious to the beauty of nature: three fantastic museums as well as the planetarium are located on or adjacent to the premises:

To be honest, I’m not so crazy about planetariums, but I like the design by Eduardo Corona, Roberto G. Tibau and Antônio Carlos Pitombo, that reminds me of an air saucer – very suitable.

Just a stone throw away is the very nice Museu Afro Brazil.

While the exhibition on Portuguese colonial art on the ground floor is a bit pointless, the upper floor is an artistic treasury showing Afro-Brazilian art from different Brazilian regions as well as the African and Caribbean influence – like masks from Benin and artefacts from Haiti.

I can only recommend visiting this venue.

You think we forgot about Kobra? No way, he will be our next stop. Let’s walk along the facade of the Pavilhão das Culturas Brasileiras and take a look at murals by other also very talented artists.

Once you spot the Marquise Do Ibirapuera, you will immediately recognize Kobra’s style – decorating a public bathroom. I guess once you are a star like him, you get away with painting also restrooms.

Next door you might want to visit the Museu de Arte Moderna de São Paulo – and maybe have a snack at their very nice cafeteria.

Entrance fee are R$ 7,00 and Saturdays are free.

Before you continue to the best and biggest of the art museums, the Museu de Arte Contemporânea, you shouldn’t miss to take a look at the sculptures in this part of the park – some of them are really outstanding.

Talking ’bout outstanding: if you want to visit only one single exhibition while in São Paulo, it should definitely be the Museu de Arte Contemporânea.

It’s the place where the São Paulo Bienal is taking place – and obviously after every bienal is over, they leave some great art behind. Actually you could spend an entire day here and awing at great pieces from all over the world.

Not to be missed!

Another beautiful park full of lush plants and great art is the Jardim da Luz behind the art museum Pinacoteca.

The Jardim has an area of 82,000 square meters, with two reflection pools and two ponds; it was declared a historic landmark by Condephaat in 1981.

As part of the downtown revitalization project, it resumed dialogue with Pinacoteca, and was renovated in 1999. In 2000, the State Government earmarked funds for the purchase of Brazilian sculptures for its lawns. Even today, the exhibit is free of charge, for those who want to stroll through its green areas and also visit an open air exhibit. The Pinacoteca houses a vast collection of modern Brazilian art and is another mecca for the art aficionados. Founded in 1905, it is the city’s oldest art museum.

His mural is to be found at the corner Avenida Tiradentes and Rua Dr. Rodrigo de Barros. On the way there you might want to see some sacred art – you can do so at the Museu de Arte Sacra de São Paulo.

To explore São Paulo’s historic center, I recommend you join a ‘free’ walking tour (remember: the guides work for tips, so please don’t make it a free ‘free’ tour).

For the ‘Old Downtown’-tour, they meet at the tourist information booth at Praꞔa República (they also offer a tour along the Avenida Paulista and to the bohemian quarter Vila Madalena).

Anyway, the downtown-tour takes you i. a. to the Biblioteca Mário de Andrade, to the grand Teatro Municipal, the Monument to Carlos Gomes – a copy of the Fontana di Trevi at the Praça Ramos de Azevedo, the Prefeitura – which is the townhall with a botanic garden and a pond on the roof; you cannot visit the building on this tour, but of course on another occasion.

If you don’t mind walking, you can stroll from downtown up towards the Paulista along Rua da Consolação.

While you admire the Nossa Senhora da Consolação church at the first big junction, don’t miss the great murals all around you; although they are not by Kobra – one of his best murals is to be seen at the corner of Rua Maria Antônia.

Once you are here, you might want to get a drink – and a break – at the bar next to the mural, that is called ‘Esquina do Índio’, the Indian’s corner.

Either keep walking or get on a bus and get off at the Cemitério da Consolação, a small, Brazilian version of the legendary Parisian Cimetière du Père-Lachaise. This cemetery is much smaller and the people buried here are not as world famous as those in Paris, still it’s a beautiful and interesting place.

Wanna know how I perceived São Paulo while I was there? Check out this lesson of my Class of Brazil series:

Class of Brazil – 5th Lesson: I Call Them Like I See Them

Do you want to read about all the other cool places I’ve visited in Brazil?
Then go to the main post and take your pick! 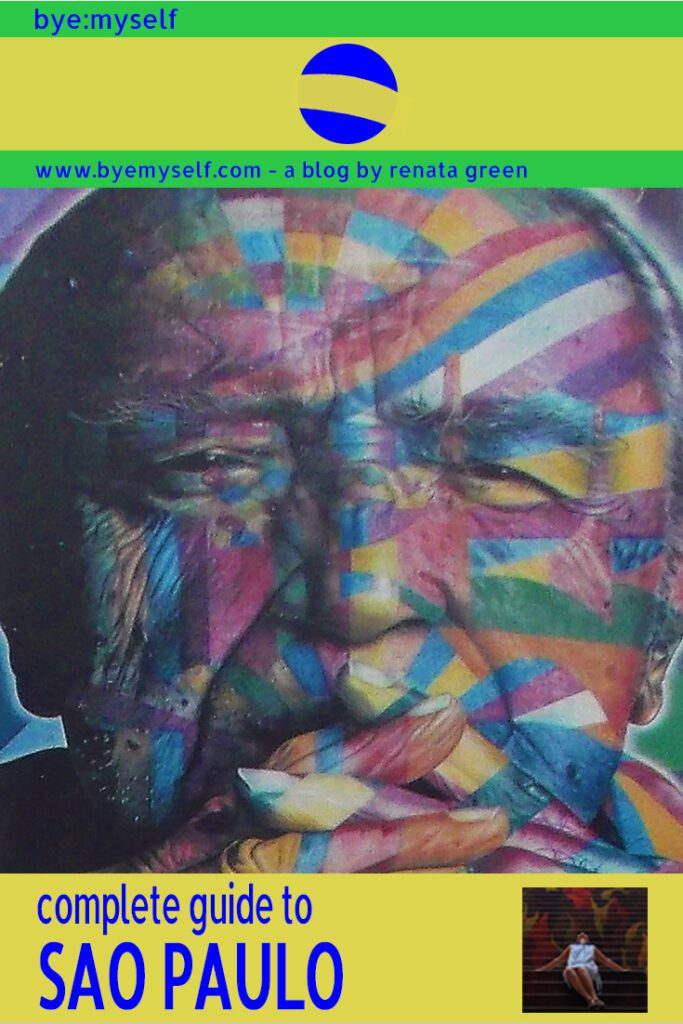 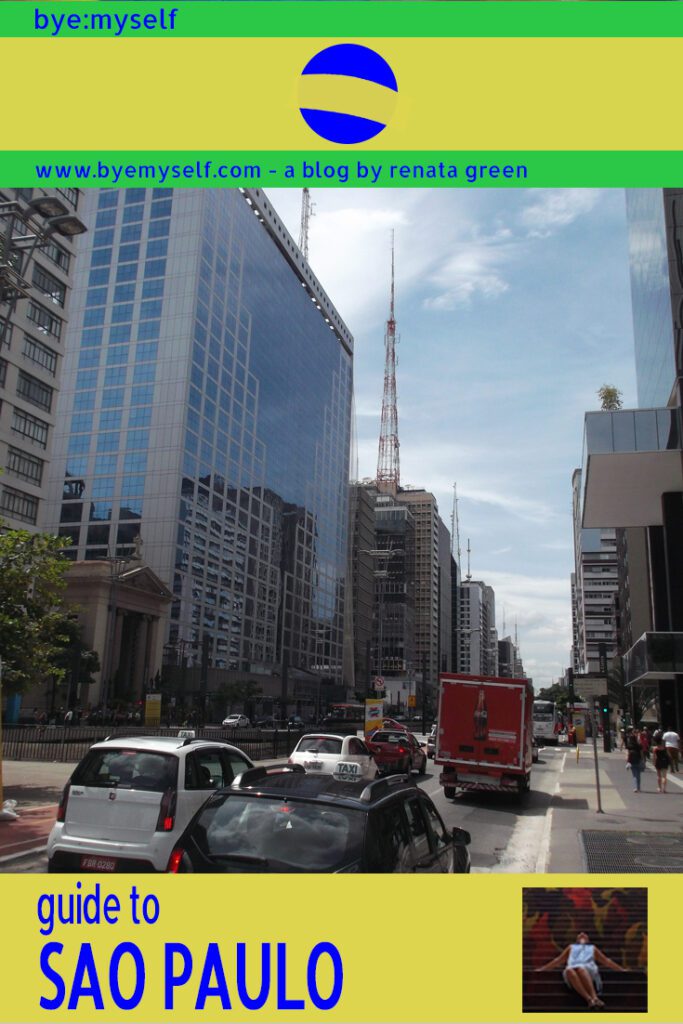 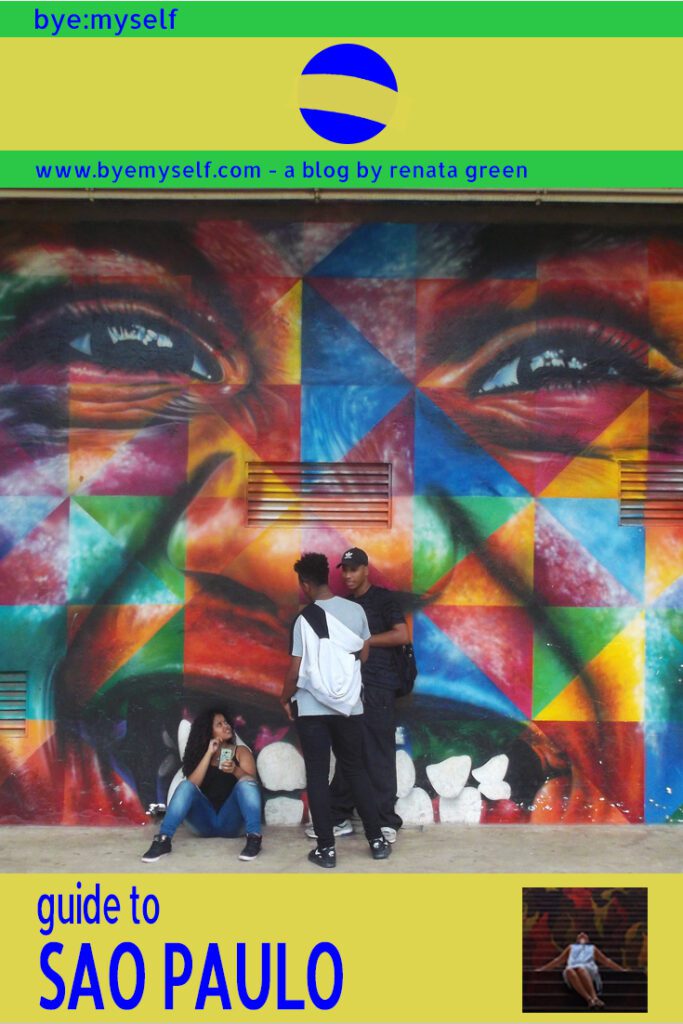 Here are more pins from Brazil for you

10 Replies to “Guide to SÃO PAULO”