Streetart is becoming more and more not only tolerated, but recognized and promoted. Especially in South America, it has a long tradition – as a medium where colors give the people a voice.

Street art is, obviously, an artwork in public locations where the artist does not only speak his mind, but often also for its people. Although there are pieces commissioned by private property owners and investors, many of the murals are created illegally – and therefore artists choose to remain anonymous or work under a pseudonym. The most famous enigmatic urban artist is undoubtedly Banksy from the British city of Bristol.

Streetart such as murals did not derive from graffiti – just think of Mexican muralists like Diego Rivera who worked long before the invention of spray cans – but are sometimes connected and combined. Especially the illegally working artists use spray paint, stencil, posters, and stickers – because they can be quickly applied – before the cops enter the scene.

Streetart often carries a social or political message – and sometimes it just doesn’t, especially when the pieces are commissioned by private investors. Is this a sellout? I don’t know. Obviously, there are different approaches to urban art.

I personally enjoyed the urban art in Colombia the most since it is wild, anarchistic, angry and rebellious.  Compared to Bogotá, much of Rio’s street art is quite tamed; however beautiful and interesting and therefore, let me tell you the story of three ingenious artists.

Rita Wainer, born in 1978 in São Paulo, the cradle of ingenious artists and Brazil’s hub to phenomenal art, was a highly aspiring Brazilian fashion designer when she decided in 2013 to move to Rio de Janeiro and give up soft fabric for hard bricks and rough earth, i. e. becoming a visual artist. And come to think of it, the step is pretty congruent since fashion can totally be considered urban art.

Rio de Janeiro – it actually was in January 2013 that Rita opened her internet store where she’s selling her sculptures – straight from her ample flat close to the Copacabana, without any middlemen, but with great success: During the first three years, she had sold 1,000 pieces – or like she puts it in an interview:  Pelé’s thousand goals.

The resourceful variety of her works – illustrations, painting on tiles and places – and, of course,  walls – is less surprising when you look at her hyper-artistic genealogy: Everybody in Brazil knows some Wainers – be it Rita’s mother, artist Pinky Wainer, be it her grandparents, actress and model Danuza Leão and her husband, publisher Samuel Wainer – just to mention the very close family.
Keeping up with the Wainers?
No way, Rita follows her own path and does not want to be seen as a clanswoman with a golden spoon in her mouth.

Although Rita Wainer’s murals are just one niche of her artistic activities, for obvious reasons, it’s the most conspicuous.

She’s painting girls. Skinny girls in bold, unshaded colors. Fragile beings with serious facial expressions. When they look at you, their glance is piercing – hardly any expression.
Often they even don’t look at you, turn their head away from the beholder in oblivion. Maybe haughtiness. Never fear.

Although these girls are so skinny and deem so airy and fragile, there is something very fierce to them; maybe it’s the black outlining, maybe the pointy outline….in any case, take their prickly gaze as a warning….never to mess with them.

Yes, him, too: Born in São Paulo in 1975, to be precise in the poor neighborhood of Garden Martinique. Therefore no descendence from a dynasty of artists. However, with over 500 works painted all over Brazil and 17 other countries around the planet, Kobra is one of world’s most famous muralists.

But yes, he started as subversive as almost every urban artists, as an illegal tagger. He got arrested three times for his passion. Illegal? Sure! Talented? Well, one judge was so impressed by Kobra’s talent that he sentenced him to….paint a mural on the wall of a police station!

Eventually, in the 1990s, Kobra was given the chance to make some money with his art by designing posters and painting toy sets. Here, too, his talent was quickly recognized and the jobs got better and more professional. Which is actually very admirable since Eduardo Kobra got no professional training whatsoever.
His asset is exclusively his talent.

Today, Kobra is mostly famous for his hyper-realistic portraits of famous people, painted over graphic patterns of geometric shapes in bold colors.

He paid tribute to great Brazilians such as architect Oscar Niemeyer and racing driver Ayrton Senna.

Anyway, slowly but surely he paints his way around the globe by paying tribute to historically important personalities such as Nelson Mandela, Albert Einstein, Anne Frank, Mahatma Gandhi, and Malala Yousafzai. But also Bob Dylan in 2015, David Bowie in 2016, and in 2017 John Lennon were perpetuated in Minnesota, Jersey City, respectively  Bristol, Banksy’s hometown.

No, Kobra is not as angry and rebellious as the young men at the Candelaria in Bogotá. However, he’s not oblivious to what is going on in his country and thematized social and political problems such as the construction of the reservoir dam in Belo Mento – destroying the living environment of the indigenous people.

Yes, but how about the awareness for the concrete jungle? In 2016, Eduardo Kobra was invited to create a gigantic mural: Las Etnias, Ethnicities, measures over 32,000 square feet and made it to the Guinness Book of Records. Of course, today, three years later, it has been exceeded at least twice.

Higher, faster, farther – very few Cariocas had a reason to celebrate the Olympic Games in Rio de Janeiro. It was a good example of how gigantomania can totally fail – and therefore, for me, it’s really difficult to celebrate an artistic project that was commissioned with the same spirit of gigantomania. However, nobody can dislike the idealist idea of we are all one people that’s behind it, so here are the five panels to be admired at the Boulevard Olimpico:

Eduardo Kobra does not have an agent or manager and can be contacted through his website.

The Cristo, the sugar loaf, these ‘colorful stairs’ – together with the world famous beaches of the Copacabana and Ipanema, it’s these three points of interest that every visitor to Rio de Janeiro puts on his to-do-list.

Surprisingly – and sadly – not many of these visitors know about the man who created those stairs, the world-famous Escadaria Selarón.

It was Jorge Selarón, a painter and ceramist, born in 1947 in Limache, Chile.

Selarón led a pretty restless lifestyle: He had passed through 57 countries before he moved to the Lapa neighborhood of Rio de Janeiro in the 1980s; right next to the stairs that eventually should make him famous – and become his death place.

After having made a living from selling paintings in restaurants all over the city, Jorge Selarón had begun decorating the 215 stairs connecting Lapa with the Santa Teresa neighborhood with ceramic tiles in 1990.

He considered this sort of a Sisiphos work a tribute to the Brazilian people.

Decorating the stairs, in the beginning, he used tiles and porcelain donated by his friends and supporters. Eventually, people from all over the world contributed by supplying him with tiles. Today, you find the most incredible – and slightly absurd – motives there. More than 2000 tiles from over 60 countries were processed.

It took Selarón twenty years to complete his work – whereby he did not consider it finished. However, the stairs were declared a city landmark in 2005 and Jorge became an honorary citizen of Rio de Janeiro.

In a documentary from 2010, the artist explained that the stairs would be finished only the day of his death.

Sadly, this day came unexpected and far too early: On January 10, 2013, Jorge Selarón was found dead on the stairs, not far from his home.

The police did not rule out homicide since he had received death threats by a former co-worker. However, friends of Jorge’s claimed that he was depressive so that suicide might have been a possible cause of mortality.

Wanna read more about Rio de Janeiro and urban art in Brazil? You might enjoy these posts: 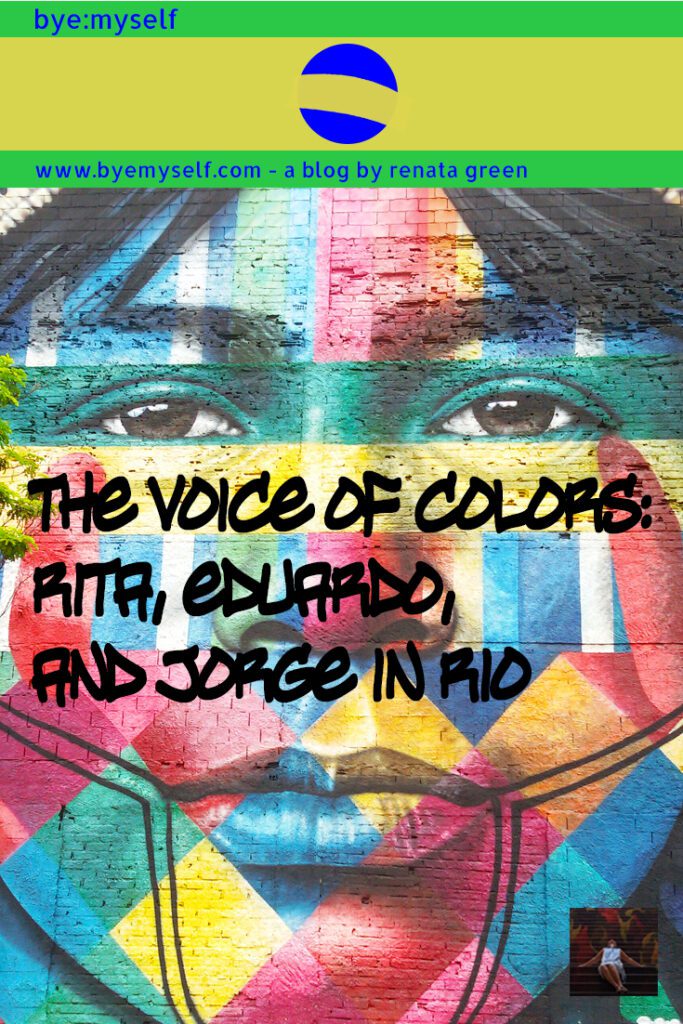 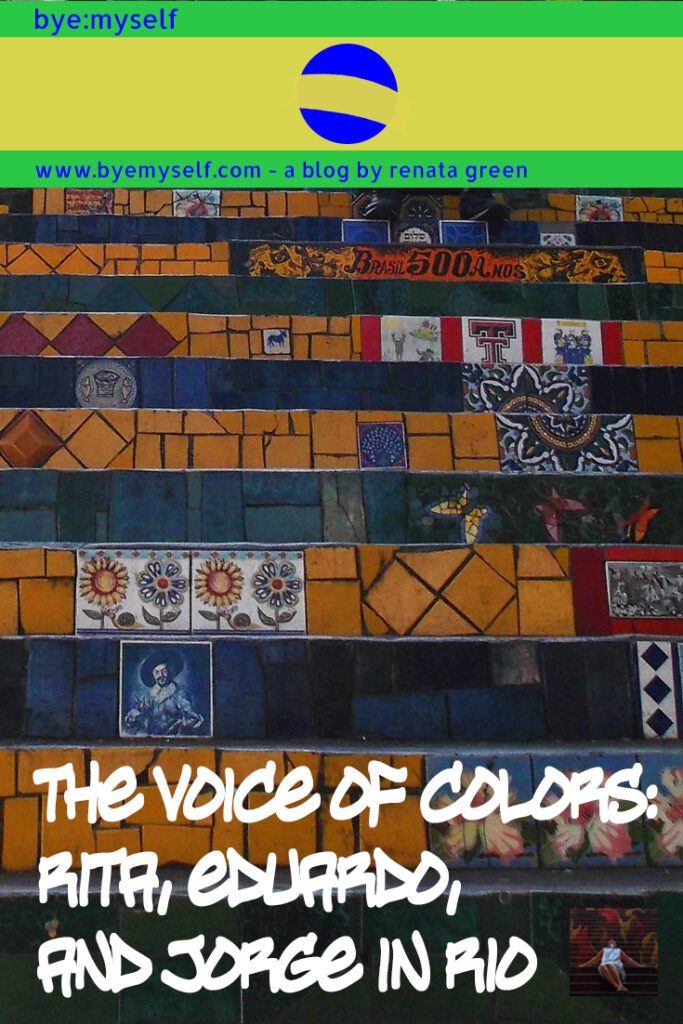 24 Replies to “The Voice of Colors: Rita, Eduardo, and Jorge in Rio”