Coimbra, located in the region Centro – halfway between Porto and Lisbon, is somewhat formidable, indeed. No wonder this majestic place even used to be Portugal’s capital from 1139 to 1256.

Today, it is home to about 143,000 inhabitants – including about 30,000 students. Where they study? At Coimbra’s most important and most visited attraction, the Universidade de Coimbra. The majestic  structure and special atmosphere put Hogwarts to shame.


Coimbra – I love the sound of the city’s name. It sounds so…Portuguese: Proud and unperturbable.
Coimbra. Every time I hear the name, I automatically hear heels clicking and I stand a bit more upright.

Before I came to Coimbra, I read in a brochure about how underestimated the city is, how people come on a day trip and stay only for about two hours when there is so much to see. Well, there isn’t, take it from me. While two hours might be a bit brief, a day trip will do.
I’m talking about the city center. Exploring also the surroundings and visiting e. g. the beach region around Figueira da Foz is a whole different story and will take longer. But for the city center, one day is enough.

And since one day – and a night – was enough, I stayed at a pretty…humble accommodation right in front of the train station. Humble, but clean; and incredibly cheap.

This hotel does not offer breakfast, so you have the great chance to experience Portuguese delicacies and life at a snack bar just one block down. Your biggest problem will be to choose. I, of course, ordered far too much so the lovely lady had to make me a doggie bag which came handy on the train to Lisbon.

In Coimbra, as in other Portuguese cities, the railway station in the city center is a railhead where only trains with the final destination Coimbra go. All other trains stop at Coimbra-B from where you have to take another train or a bus to the city center. Going from Coimbra to e. g. Lisbon, you have to go first to Coimbra-B and change trains there.
That’s important to know so you don’t miss any trains or connections.

But now let me give you the tour of Coimbra – you will love it. The old city center is just gorgeous, but during the day packed with tourist groups.

Coming from the train station, take a short walk along the river Mondego to the Largo da Portagem. Not only is this square one of the most beautiful ones, you also find the tourist information here.

From the Largo da Portagem, just stroll along the elegant Rua Ferreira to the Rua da Almedina, leading to the Torre da Almedina, the Almedina tower. If you are interested in learning more about the city’s history, you might wanna drop in – short before you get to the arch – at the Museu da Cidade da Coimbra, the city museum.

From the arch, you wind your way up on stairs and cobblestones – shoes, ladies! – to the Sé Velha, Coimbra’s old cathedral.

Along the way, you’ll see many little souvenir shops and cafés and snack bars and on the Rua Quebra Costas a couple of Fado bars. Many of the concerts start already at 6 p. m. Since these aim more for the day tourists, I would prefer a later session.

After visiting the Sé Velha, a Romanesque Roman church opened in 1146, keep on climbing and you’ll finally get to the major attraction, the university.

While the Paço das Escolas, the impressive main square, some galleries, and of course all the streets between the outer university buildings can be visited for free, you only need a ticket if you want to see the famous Biblioteca Joanina, the university’s old library, completed in 1728. The baroque building houses about 200,000 books – and we are not talking Penguin here. The first books are dating from 1750. It’s really beautiful and very impressive.

If you want to visit the library, the first thing you should do as you arrive on campus is to buy your ticket: There are only 60 people at a time allowed to enter. Since you’re allowed to stay just ten minutes, normally you don’t have to wait too long, however, you cannot expect to be let in right after buying your ticket, your time slot might be a bit later.

Going from the ticket counter back to the main square, take a good look at the Porta Férrea, the iron gate.

Besides the library, the indisputable highlight, there are more interesting things included in your ticket such as the adjacent Capela de São Miguel, St. Michael’s chapel.

Next to the chapel is the entrance to the Torre da Universidade. Before you climb up, a student has to anounce you upstairs since the staircase is so narrow that only one person at a time can go up or down. On top of the tower, you have grand views over Coimbra and the river Mondego.

Once you’re ready to go down again, another student has to call downstairs to check if the stairs are clear.

Entering the building through the Via Latina, the main entrance, you can visit some of the majestic halls such as the Sala Amarela, the yellow hall, the Sala dos Archeiros, the armory. Following a long hallway, you get to the great hall of acts, the Sala dos Capelos.

At the end of the tour is the Sala del Examen Privado, the private examination hall, which used to be part of the Royal Palace and the King’s private chamber. In this room, the first reunion between rector D. Garcia de Almeida and the professors of the university took place on October 13, 1537, date of the final installment of this fine institution at Coimbra.

Connected to the university, there are some scientific museums to be visited such as the Museu Botânico, the natural history museum, and the Museu da Ciência da Universidade de Coimbra, the museum of science which is included in your ticket.

If you feel like taking a walk without constantly awing at ancient buildings, walk in the southeastern direction from the university and visit the Jardim Botânico da Universidade de Coimbra, the botanic garden that’s part of the university.

Just around the corner from the museum of science is the Sé Nova, the new cathedral of Coimbra, and next to it you can visit the Museu Nacional Machado De Castro, the National Museum Machado de Castro where you can admire Gothic sculptures and religious art.

Even if you don’t visit the museum, check out the courtyard since the whole complex is architectonically very interesting.

From here, make your way down back to the Rua Ferreira Borges and continue walking north. In the early evening when the tour groups are gone, the Portuguese life conquers the city and you can sit in one of the cafés watching people doing their shopping and running their errands.

As the Rua Ferreira Borges continues into Rua Visconde da Luz, at the end you’ll reach the Praça 8 de Maio where the Igreja de Santa Cruz is located. While this house of worship, built in founded in 1131, is not necessarily the most beautiful church around, it is a National Monument due to the fact that two Portuguese Kings are buried here.

At the town hall, which is the building next to the church, turn right into Rua Olímpio Nicolau Rui Fernandes. At the next block on the right, you’ll spot an interesting building, the Claustro da Manga, one of Portugal’s first Renaissance structures.

Across the street, it’s complemented by the Fonte Nova, the new fountain, also known as the Fonte dos Judeus, the Jewish fountain. It dates back to 1137, but was remodeled in a baroque fashion in 1725.

And this, meus amigos, was Coimbra. In one day.

Do you want to read about all the other beautiful places I’ve visited in Portugal?
Then go to the main post and take your pick! 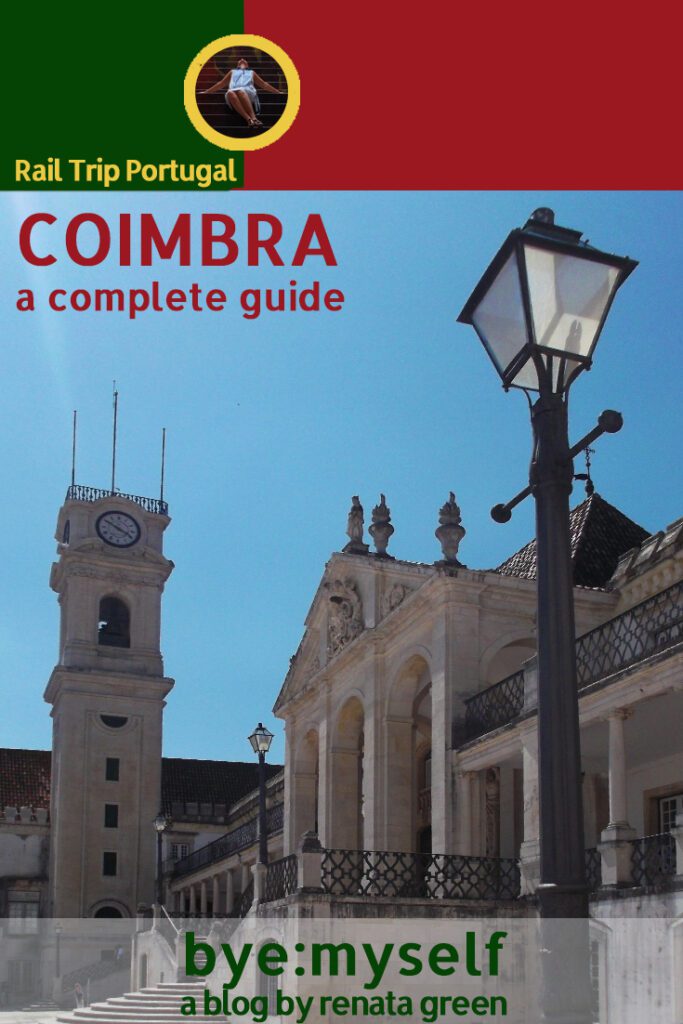 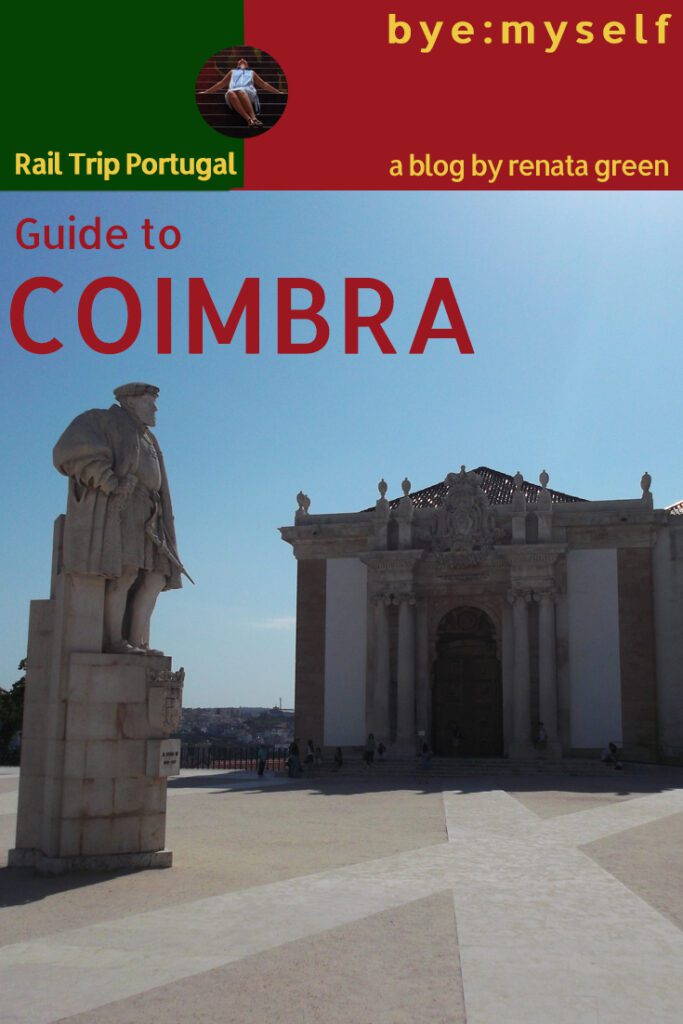 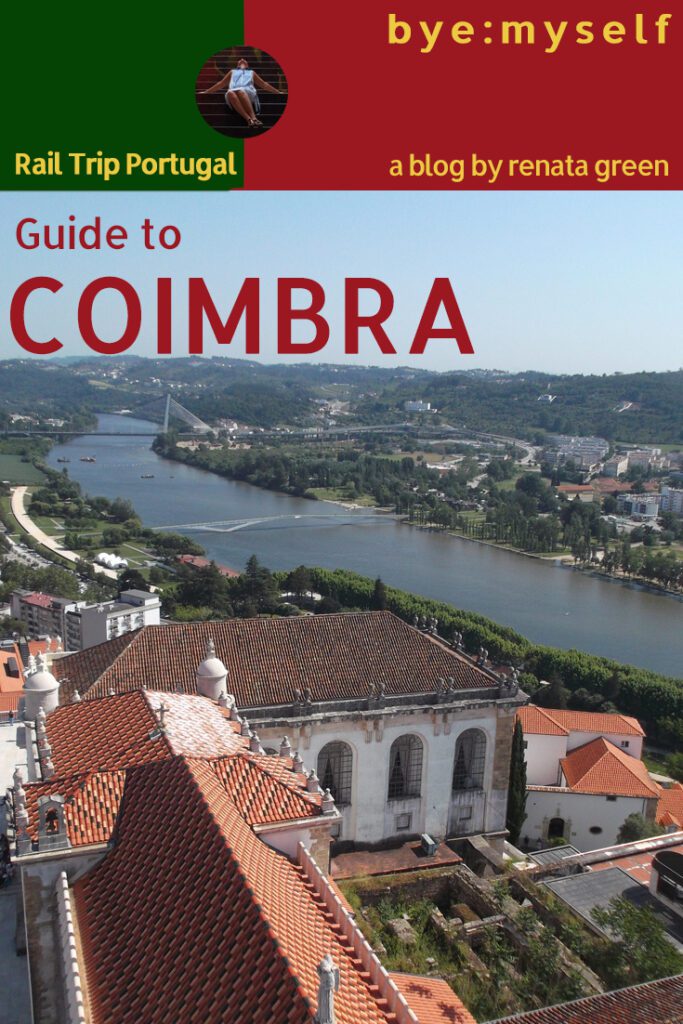