This is a guide to George Town on Pulau Penang, after all, one of my favorite cities in all of Asia.

What makes it so special?
I don’t even know where to start.
It was the first British settlement in Southeast Asia and became – together with Singapore and Malacca –  a British crown colony in 1867.

George Town, counting about 710,000 inhabitants, is Malaysia’s second-largest city and the capital of Penang Island.

Pulau Penang is a very diverse island and has therefore always been one of Malaysia’s most popular tourist destinations.

And there definitely is a reason that the historic old town made it onto the list of UNESCO World Heritage Sites in 2008.

Obviously, George Town got on the list for its well-preserved colonial architecture. However, this nomination was the initial spark for transforming the city center into an outdoor museum.

The Iron Men of George Town

The Malaysian sculpture studio SCULPTUREATWORK won a competition with their concept of telling George Town’s through funny cartoons made from iron rods.

Although the material and make give them a homogeneous appearance, the signature of each of the local cartoonists who invented the motives can be distinguished.

He has not only depicted local culture and customs. He also used given props such as bikes, a chair, or windows. This made his works a mix of mural and installation.
New, ingenious, inspiring.

Naturally, these works inspire the many admirers to interact. Obviously, everyone wants their picture taken being part of some genius artworks.

Young Zacharevic, he was born in1986, has since then been invited to embellish places in Singapore, Barcelona, Lisbon, and the Wynwood Walls in Miami.

Since Zacharevic’s interactive murals are such an overwhelming success, other street artists jumped on this particular bandwagon and are also creating designs including the givens.

But you will also notice that there is a remarkable number of cat-murals – hm, what is that all about?!

Here are two more examples of what I liked best. But there is so much practically everywhere you look that it can be only the tip of the artberg.

The George Town Festival is an annual, month-long art festival.

In 2016, CHAIRS was a community project taking place during this festival.

It was a social experiment. They wanted to find out how people react to scores of individually decorated chairs placed at various points around George Town’s heritage district.

By the way, what enthralls me most is with how much respect and care all these projects are treated. Nobody damages or steals the props, no one smears something stupid on the murals – it’s very impressive.

There are all these different ethnicities in Malaysia and Penang is no exception to the rule. The reason for being Malaysia’s gastronomic capital is buried deep in the pots and pans of Malay, Chinese, and Indian restaurants. Whether at elegant restaurants or rustic booths and carts.

Apart from their culinary temples, these ethnic groups also have their houses of worships.
This makes a trip to Penang an unforgettable cultural experience.

Great insight into Malaysia’s colorful past is granted at former private mansions such as the Cheong Fatt Tze Mansion. Called The Blue House, you might already have seen in movies like Indochine.

Penang is an island, hence there are beaches. However, I would not necessarily recommend planning a beach vacation here; on this purpose, you should rather consider crossing over to Pulau Langkawi.

Nonetheless, it is hot in Malaysia, stuffing face at the restaurants and chasing art in the streets can be exhausting. You might wanna just stretch out on the fine white sand and take a refreshing dip in the ocean.

The most popular beaches like Batu Ferringhi and Tanjung Bungah are located north of George Town and can be quickly reached by bus #101 e. g. from the Komtar bus terminal downtown.

Nevertheless, Monkey Beach is said to be the nicest one and while I don’t know about that, I can confirm that it’s the most secluded – which doesn’t make it any cleaner, by the way.

You can reach it either by boat from Teluk Bahang or you hike for about one hour through the Penang National Park which is nice but cannot be compared to other tropical forests in Malaysia.

If you are looking for a more genuine hiking experience in sumptuous nature, I recommend you climb up the island’s central hills west of George Town.
However, the peak is also accessible by a funicular railway from its base station on Hill Railway Road.
Albeit, I have to warn you – on busy days the wait can be extremely long.

Like many of these more highly situated places in Asia – such as Da Lat in Viet Nam or Thansur Bokor in Cambodia – Penang Hill, too, used to be a retreat for British colonials.

Today, it is a popular tourist attraction – mainly for the grand views.

How to Get There…

George Town is a UNESCO World Heritage Site and, henceforth, one of Malaysia’s most visited places. Therefore, getting there is really easy.

Penang International Airport is actually one of Malaysia’s busiest airports. Obviously, international refers to flights from more or less neighboring countries such as Thailand and Singapore, but also China and Taiwan. There are a couple of low-cost airlines serving Pulau Penang so that, unless you are meandering the country on a road trip, flying in might be the best option. However, the airport is located about 16 kilometers south of the city center.

If you are coming from the peninsula’s southern tip and don’t want to make too many detours, taking the train is a great option.

Actually, there are to train routes. One – called the jungle railway – is crossing the central inland. The only touristy stop would be at Jerantut from where you can continue to the Taman Negara.

The more important route goes along the Westcoast and connects Johor Bahru with Padang Besar. The relevant stops for travellers on this route should be Kuala Lumpur, Ipoh, and Butterworth.

Butterworth is the stop on the mainland from where you can take a ferry to George Town on Pulau Penang.

This is very convenient since the train station, the bus station, as well as the jetty, are right next to each other.

Last and least, there are tons of buses shuttling people between places in Malaysia – all the way down to Singapore.

Although they are a quite cheap option and also the most flexible one – you are not depending on flight schedules or rails – they are at the same time the least alluring one.
Believe you me, I’ve been travelling by bus all over the planet and must say that Malaysian long-distance buses are the worst equipped ones and, in addition, the drivers are unbelievably rude.
Need proof? Then read about this little adventure.

Anyway, if you are on a road trip across Malaysia, you probably won’t be able to avoid a couple of bus rides.

However, private companies who usually operate mini-buses are slightly better and sometimes even offer a door-to-door-service. While the vehicles are better, the drivers aren’t, so arm yourself.

Note: There are two major bus stations on Penang Islan, one is Sungai Nibong Bus Terminal and the other one is Komtar right off the city center. It happened to me that the bus schedule quoted Komtar as the final destination and the very boorish driver kicked us out at Sungai Nibong Bus Terminal, anyway. So you better inquire very specifically – and don’t act too surprised if you still end up at Sungai Nibong.
A cab will charge about 25 to 30 Ringgit to take you downtown.

Also, there is a relatively new and very modern bus station in Butterworth on the mainland, located right next to the train station and the jetty. Hence, this might be a good option, too.

…And How to Get Around

If you are a fit walker, the center of George Town can best be explored on foot. There is so much to see at every corner so you’ll constantly stop in your tracks, anyway.

Theoretically, it’s possible to cycle. However, the roads are pretty bad, traffic is crazy, there are people everywhere – naw, just walk.

To get further, there is a comprehensive bus network taking you literally everywhere on the island of Penang.

Just like in Kuala Lumpur, there is also a free tourist bus – CAT – that takes you to all the standard points of interest.

And, obviously, you can always hire a cab.

Talking ’bout views – the best hotel for this is definitely the Gurney Resort*. Actually, there are many great – and taaaall – buildings on Gurney Drive, but this resort has definitely the best service-price-ratio and is also affordable for Cheap Charlies like me.

However, try to get a room as high as possible, make time for checking out their amazing swimming pool, and

check out their availability and rates.*

I think it would be much quicker to tell you about the places where the food is not good. Hence, I honestly suggest you just walk around and keep your eyes and nostrils open and eat your way through this city of milk and honey.

If you insist on a recommendation, then I can tell you that I had the best butter chicken of my entire life at Tandoori chicken and Nan Restaurant across the street from Nagore Dargha Sheriff shrine – and I had my share of butter chicken alright. 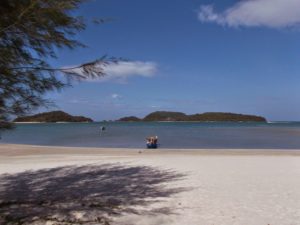 4 Replies to “Guide to GEORGE TOWN on PULAU PENANG”