Sharing info on a trip across Cuba is particularly challenging since things were changing so fast. After Barack Obama and the Rolling Stones had left, between us travellers it was consent that Cuba was standing at the dawning of a new era and that we were witnessing the last days of an expiring epoch.

But the truth of the matter is that it was only us foreigners having this impression and being all excited and sketching a great change. The local people were very dubious about it, and I can relate to that: when day in, day out you stand in line for the simplest, basic products, when even when you make a little money you cannot basically buy anything, when you don’t feel your personal life getting at least a little bit easier, than you probably see no reason to believe in some greater progress.

So anyway, we people from abroad felt witness to a historical moment and came in flocks (“before all the gringos will be allowed to go to Cuba and transform it into some kind of Caribbean Disney World” – everybody said so).

Until now, even after Fidel Castro’s death, nothing much changed in Cuba, and in the US Donald Trump is turning back the progress of world’s history. Maybe our prognosis was premature and things won’t change as fast as we hoped and at the same time feared.
Some facts: Cuba has a population of about 11.25 million people and a size of 109,884 sq km (approx. 42,426 sq mi). The climate is tropical, the official language Spanish (you might brush up yours on babbel) – and this is, of course, because Cuba used to be a Spanish colony.

In the 17th and 18th century, Africans were brought to Cuba as slaves to work on the sugar cane and tobacco fields. Cuba became an independent country, yet not fully sovereign due to the Platt Amendment that granted the USA the right to intervene at any time the interests of the US seemed impaired. This status – am I the only one who finds that bizarre? – was kept till 1934 and infamous Bahía de Guantánamo (Guantánamo Bay) is still part of this anachronism.

In 1959, Cuban revolutionaries, guided by Fidel and Raúl Castro, Camilo Cienfuegos and Argentina-born Ernesto Guevara, aka Che, brought down the dictator – and US-puppet – Fulgencio Batista and founded a socialist state.
Although the idea of justice and equality, of health care and education for everybody, was a good and noble one, unfortunately, this revolution, too, was not only fair and square – and particularly the revolution’s pin-up Che was in charge of the re-education and the vision of the new man.

However, it was not the violation of human rights that lead to the still lasting US embargo, but the confiscation of companies and real estate owned by US-citizens and wealthy Cubans who eventually migrated to the US, mostly Miami.

There are two official currencies: The CUP (Peso Cubano) and the CUC (Peso Convertible). The CUC is pegged to the US Dollar, but be aware that when changing US$ to CUC, a fine of 10% is deduced. With other than US credit cards, you get money easily from ATMs, and there were ATMs everywhere I went, even in the smallest, secluded places.

The fact that Cuba has two parallel currencies makes things a bit more complicated, for travellers more expensive and cheating for locals easier. Still, I don’t get it why tourists pay willingly 1 CUC for using the bathroom in a country where it’s known that a teacher makes like 20 CUC a month. Aren’t these people thinking? How could this ever be the adequate price? I recommend – although it’s not legal – you try to get some of the local currency CUP (you get 25 CUP for one CUC). Many things have to be paid equally in CUC or CUP alike (e. g. a small pizza was 18 CUP or  0,70 CUC), but for instance, at non-touristy stores like the local pharmacy and the above-mentioned bathrooms, it’s handy to have a couple of CUP.

I need to point out that Cuba is, despite the difficult economic situation for the local people, rather costy, and the tendency of locals to milk the cow called tourists as much as they can make it even worse. So try to bargain, and if you have the feeling of being screwed over, you’re probably right. I got mainly cheated by (cab-)drivers, but I’ve heard all sorts of stories about shops, restaurants, etc. Although it’s hardly ever a big amount, for me it’s a matter of principle. I don’t like the feeling being taken for a moron.

The best way to rest your head is to book yourself into a ‘casa particular’ since most hotels are run by the government and the employees are not so very service oriented. A ‘casa particular’ is someone’s private home licensed to rent rooms to tourists. Since the government has a firm grip on these private businesses, all the rooms are nice and meet international standards. The owners have to pay a certain amount to the government whether they rent the room or not, therefore they are keen not to leave rooms empty, hence the service is really good. It’s also advisable to eat not only breakfast but also another meal at the casa since the food is always better than what you get at (government run) restaurants. The only exception might be if you eat at a ‘Paladar’.

A ‘Paladar’ is a legal, privately run diner. It can be a single table in a back room of a private home or a large, fancy and pricey restaurant. The food at Paladares is always better than at a restaurant run by the government, and since the owners have the interest to get and keep customers, they are friendly and attentive while waiters at the regular restaurant rather slack.

My plan was to see in three weeks at least the below-described places, visit sites and venues of historical and cultural importance, meet the people, hike, and bike a little in nature and hang out on the beach. Most travellers go from the Western part around Viñales to the center and end up in Trinidad. I managed to go all the way from West to East by busses but eventually did fly back to Havana.

I organized and booked everything – like accommodations, buses, flight – beforehand, which made travelling really easy and avoided problems, delays, and disappointments.

This is the route I’ve travelled….

….and these are the places I’ve visited

And if you choose to pin this post, please use one of these pictures: 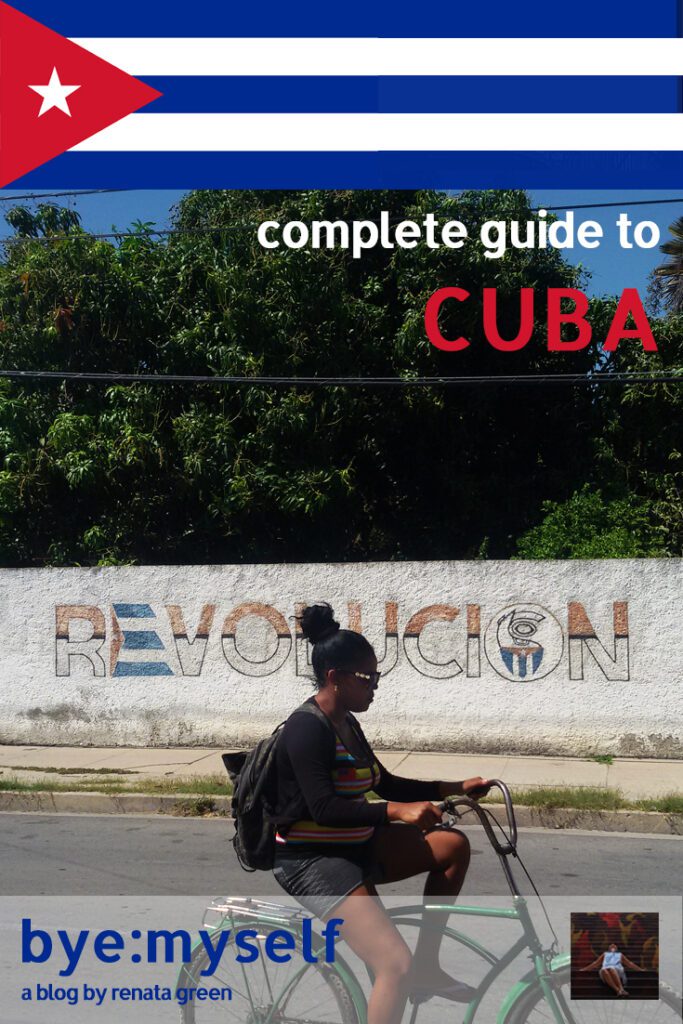 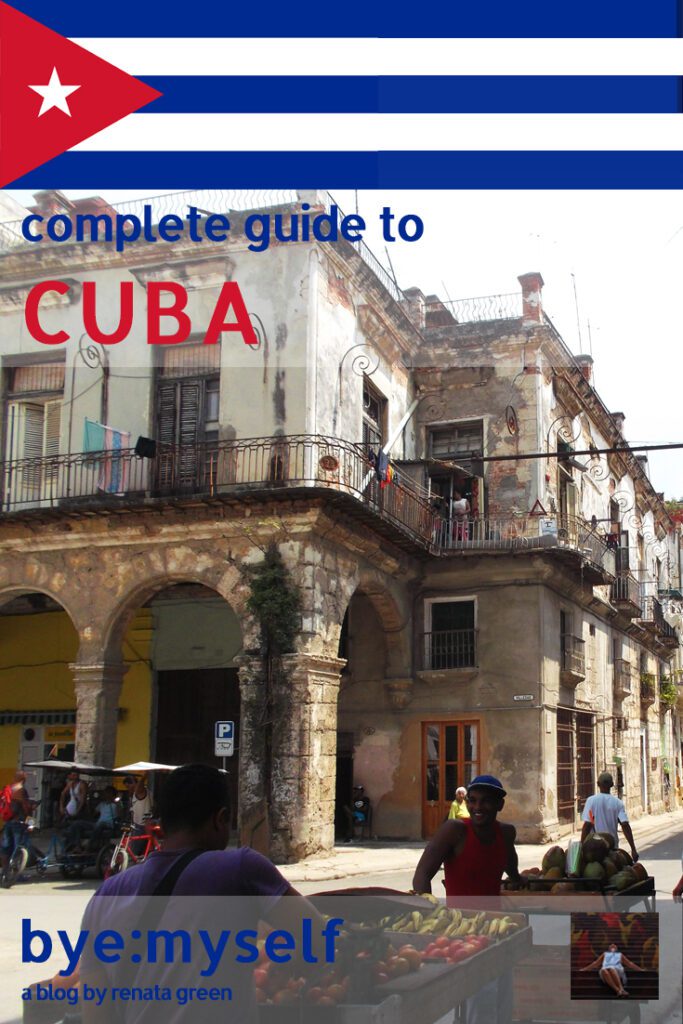 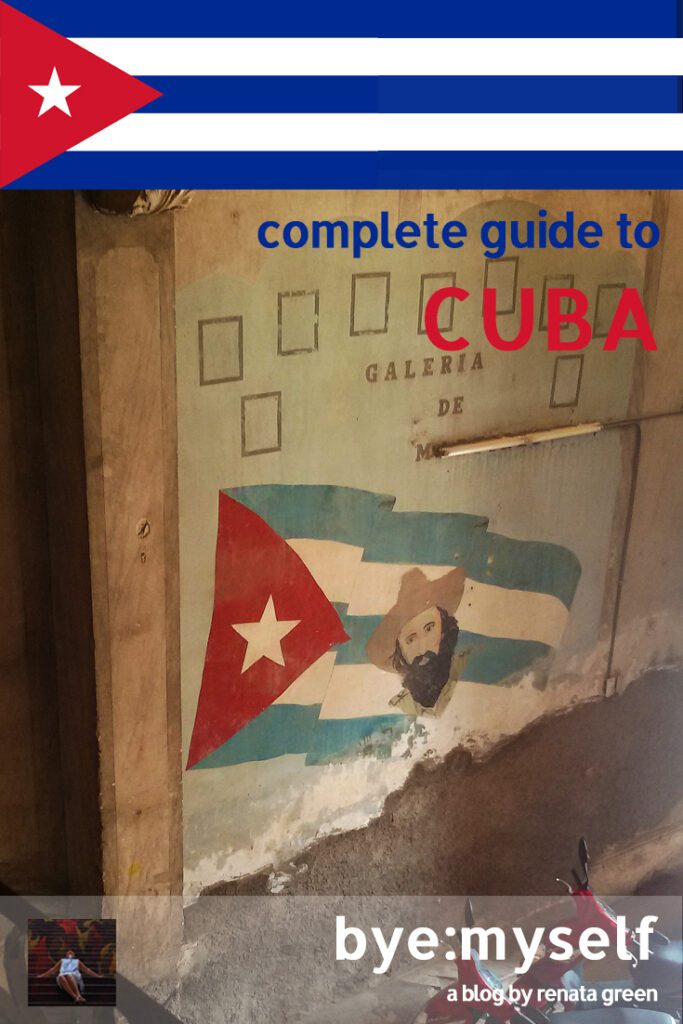