It wasn’t even on purpose that I neatly divided my trip into three parts: culture tour during the first week, nature trip during the second, and now it’s the final countdown on the beach.

After having been a bit disappointed by Tangalle, I chose Mirissa as my next destination. All I can say is: Well done – hence, life is a beach, after all!

Racing from one place to another, schlepping a carry-on suitcase and a daypack-sized backpack with me that seems to get heavier from day to day even though I’m disciplining myself and postpone shopping to the very last day is fun, but it’s also exhausting.

I was very much looking forward to a couple – couple in the sense of several, not just two – of days on the beach, sunbathing, reading, sleeping, and cooling off in the ocean; maybe a little snorkeling. But other than that: Nada, niente, rien du tout!

There is one downside to this otherwise perfect concept: Days pass quicker, they become one long mass of time that just floats by. I wrote about this phenomenon in one of my Portugal-posts: I was there only for nine days, but since I changed my location almost daily, the trip seemed much longer. Time just flies by as you stay only in one place.

But in Mirissa, there is a perfect solution to this problem: The south coast between Mathara and Galle consists of many beaches, big and small. There are cozy little bays, difficult to reach and therefore pretty secluded. There are long spans of white powdery sand, and there are these standard beach-bed-in-front-of-beach-bar stretches of relaxed beach life.

All this within reach from Mirissa. People rent scooters and off they go exploring beach after beach.

As meanwhile everybody knows, I’m not driving. And I’m not riding a scooter – between all these maniacs on Sri Lankan roads – no way, José.

I’m a public transport gal and in Sri Lanka, I’m going by bus. If you can’t beat them, join them.

I believe I’m in danger sitting on that bus; but everybody outside the bus is the mad driver’s living target.

Exploring the beaches by bus is – alas! – fast and dirt cheap: Going from Mirissa to Waligama, the next beach town about four miles west, sets me back 15 cents; by private bus. The governmental is cheaper.

7th Memo: Good Luck in Tangalle. It’s not so easy being an expat.

Tangalle – another town, another homestay.

I’m staying at a room in a lovely…yes, one could call it a mansion. My hosts are a couple from….well, he is a native Sri Lankan, she is from Ukraine, they were living together in Austria and he decided to come back to Sri Lanka due to the supposedly increasing xenophobia in Europe.

I say he decided although their wording is, of course, us. But she hates the heat and is all jealous that I’m going back to European winter in a couple of days.
She doesn’t like the beach – and is living now in one of Sri Lanka’s most popular beach destinations.
She doesn’t seem to be happy.
He neither, for that matter.
He hasn’t been living here for over twenty years. I assume that he has been back as a visitor, but now he wants to have a business here and seems pretty disenchanted and stressed out after only three months.

I also wanted to live in the tropics for a long time. When I first visited Jamaica at the age of 24, the way of life took me by storm. Yes, I admit it, also my first Jamaican boyfriend took me by storm.
But it was mainly the rhythm of reggae, the beach life, the easy-going no problem, mon, irie-i.
My European life seemed so dull and grey and out of rhythm.

I travelled back and forth for a couple of years, constantly checking out my chances, got into a mess and dropped my Jamaica-plans for good.

However, after that, I felt a bit disrooted and hooked to the idea of living in a tropical country doing….whatever.
I applied for jobs in tourism – and actually was invited to an interview first in Basel where the headquarter was and eventually in Mombasa where that company owned half a dozen of hotels.
Now, that was a disenchanting experience: All the Europeans working there seemed to hate everything African and were constantly complaining about everything local. The woman that interviewed me literally said that they are employing rather African men since the women are not so clean. All the conversations were on this level.
Wait a minute – I wanted to move to Africa because of…Africa and not to be the bored, frustrated white massa.
This is alluring only in Graham Greene’s novels.
This job was not for me – and I was not for them.

Since about six months after my Mombasa-trip, I got pregnant, the nomad lifestyle had to be postponed; until my daughter turned two and we moved for six months to Belize.

Belize is in Central America, but it still has a certain Caribbean feel to it. The language – the Patois or Pidgin English – is pretty similar, they listen to reggae and calypso – and in addition to punta rock, a very rhythmic, staccato-like music by the Garifuna, an indigenous ethnicity that came from Saint Vincent to the shores of Central America.

Anyway, so I was back to the Caribbean vibes – but how different that was with a toddler and responsibility and chores.
While others lived the life that had attracted me so much to Jamaica, I stayed home watching over my daughter. Not so different from Germany; only the weather was better.

By that time I had already buried the dream of the exiting, wild, and free life in a tropical region. With a smile and no regrets at all.
It’s nice to dance nights away, enjoying drinks, fooling around, But at least to me, it’s not satisfactory on a long term, it cannot be my personal meaning of life. And I also do not want to do….whatever. Not at my age. Not with a child.

Well, the child is 26 now – I could still go. But I’m not interested at all anymore.
A sabbatical – maybe.
But waiting tables just because the sun is shining?
For now, it comes down to a couple of trips every year.

Another reason is also that while I was living for months in Central America – after six months in Belize we also spent many months in Honduras and three months in Costa Rica – I’ve seen so many expats being pretty unhappy.

They all had started with these really good ideas, some even had money to invest, some struggled a bit. After a couple of months, they always got frustrated. Because things are much more complicated. Because they got screwed over by their what they thought good local friends. Many of them backed away, lived in an expat ghetto, threw themselves on each long term traveller like me – a person that carries a bit of their former life with her.
What’s the point of living isolated in a place where I slowly start to hate everything and distrust everybody?

Many of them had a heavy drinking problem – which is unfortunate since many ran bars.

By no means do I say that this has to happen to everyone. It also strongly depends on your expectations and plans. If a twenty-something goes for a couple of month to the Caribbean and works at a bar just for the fun of it – great idea! If a teacher or doctor is sent to work and help in another country – fantastic.

But if you leave your life behind to open a business in a country where you’ll always be an alien – and be treated accordingly…..well, I really wish them well.

I know: It is very tempting to just stay in one place and enjoy the ‘dolce far niente’ – especially after weeks of roaming the island. 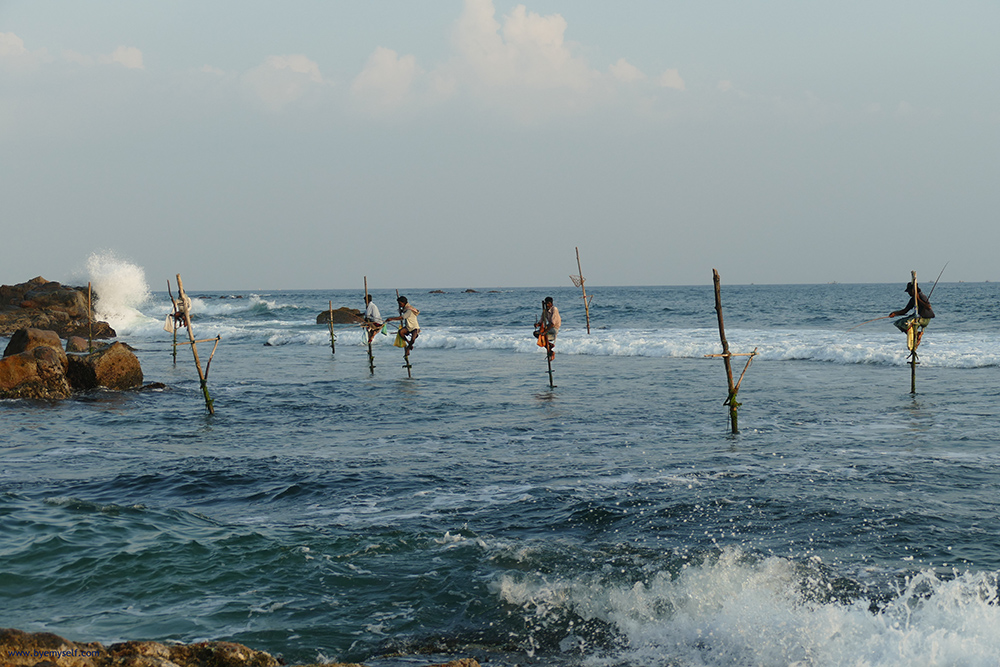 The famous stilt fishermen waiting for a catch close to Coconut Beach in Weligama.

But why not doing nothing – but each day in another breathtakingly beautiful place? Beaches around Mirissa can be easily reached by bus, tuk-tuk, or a rented scooter – and every single of them is totally worth the “effort” of beach hopping.