More than in any other Asian metropolis, tradition, and modernity in social graces, culture, and architecture are so balanced. A visit to Thailand’s vibrant capital is a must on every trip to Thailand. 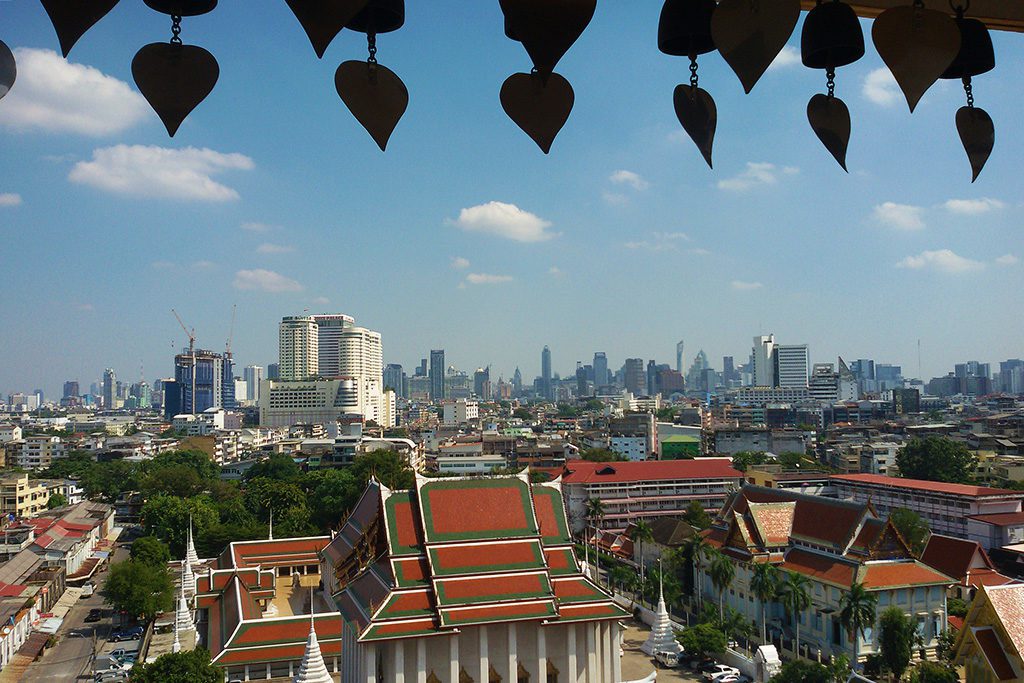 Panoramic View of Bangkok from the Golden Mount

Therefore it’s very convenient, that most individual travellers are landing in Bangkok, a  city certainly worth a visito of more than just one night.

Getting into town from Suvarnabhumi Airport is quick and easy – there is a subway going straight to Phaya Thai station where you get connected to the Sky Train. Although it’s really fast and easy, after flying around half the globe I treat myself to a cab bringing me straight to the hotel door.
To catch my return flight, I did take the trains and it was easy-peasy.

Exploring Bangkok – there are oodles of ‘Wats’ to admire, beautiful, colorful, gold plated Buddhist temples. The biggest one is the Wat Phra Keo located right next to the Royal Palace. The entrance fee for ‘farangs’, i. e. foreigners, is quite high – 500 Baht which equals 15 US$ resp. €, but it’s a must and really impressive. With your ticket, you can visit the textile museum where you can admire Princess Sirikit’s lavish wardrobe. I even had the chance to admire Princess Sirikit in person, but we come to that later.

After visiting Wat Phra Keo you can take a relaxing stroll around the Royal Palace’s garden.

The second famous Wat should be Wat Arun on the other bank of river Chao Phraya which gives you a good opportunity to take the ferry. We get to river Chao Phraya later, too, now we are dealing with the Wats that you find at every corner so I’m just pointing out the five most important or beautiful.

The one I liked the best was Wat Po because of the nice outlay (every Buddhist minding the meticulous arrangement of the Wats will now roll his eyes – wait, he won’t, he’s a Buddhist so he has to be patient with me being an ignorant farang calling his temple an outlay). Talking ’bout “lay” – there is a humongous reclining Buddha there – one of the most gracious I’ve seen.

Another impressive Wat is Indrawiharn. The Buddha here is tall, very tall, 32 meters – equals 100 feet – tall. The fact that the statue is rather flat, makes him distinctive. His most imposing part are his enormous feet. He could easily stamp the people placing their donations around them into the ground; but he doesn’t because he’s Buddha, a good person.

And now we get the Wat Trimitr which is worth a visit also due to his perfect location next to the Hua Lamphong train station and the Chinese gate. When I got there, there were hundreds of people and stewards and marshals ordered them to take their sunshades off and forbade to take pictures which were a big disgrace because of course, everybody would have loved a Selfie with Princess Sirikit who was expected any minute and whom this brouhaha was about. So damaging my shadeless eyes by the glaring sun, not taking Selfies, I awed at the princess.

Bangkok is also known for mind-blowing (and I’m choosing this adjective on purpose) shopping malls which are a world of their own especially since they are all connected by long tunnels and bridges so you don’t have to leave this perfect consumers’ paradise: There is 1. Siam Paragon, 2. CentralWorld, 3. MBK, 4. Siam Discovery, 5. Siam Center, 6. Terminal 21, 7. Platinum Fashion Mall, 8. Pantip Plaza…do you really want me to go on?!
Once you’re there, it’s worth it to have a meal at their food court since they have an incredible range of Asian and Western food at good prices.

I must say that I liked much better hanging out – or being shoved – on the local markets such as Chatuchak Weekend Market. Other markets- that are definitely not for claustrophobic people since they are extremely narrow and stuffed and to make matters worse partly covered with some plastic plane – are the Sampeng Market and the Pahurat Market in Chinatown West of Hua Lamphong station.

Not far from the malls at National Stadium BTS station is Jim Thompson’s Thai paradise. Jim Thompson came to Thailand towards the end of WWII and fell in love with the country and he admired the old silk craft and made a fortune reviving it. As his private home, in the 1950s and 1960s he brought together six traditional Thai houses – whereby some of them were over two centuries old – by demounting and reconstructing them on his property where today they are open to the public as a nice museum (of course including a spacious gift store). Jim Thompson disappeared during a vacation to the Cameron Highlands in Malaysia, but here comes a spoiler alert since you will learn everything about him during the guided tour through his property.

If you have only a limited amount of time to spend in Bangkok and have to choose what to visit, I would rather visit Jim Thompsons estate than the old Vimanmek Teakwood Mansion although it’s nicely located in a very posh area North of the centre. If you have more time in Bangkok, it might be relaxing wander around the parks and the zoo, but I had only three days in total and was more interested in other stuff.

As soon as a city has rivers and creeks there are touristy boat rides taking place and people – or probably only guide books – call it the Venice of…whichever place they are. I live in Hamburg most of the time, and there is not only Europe’s second largest harbour (after Rotterdam, if anyone cares), here, there is also lake and river Alster and supposedly more bridges than Venice (but we’re talking quantity, not quality resp. beauty here), so I’ve had my share of Venice of Whatever. But if you are interested, you should rather take a local express boat than the Chao Phraya Tourist Boat. Another Venice of Thailand-experience is the klong tour through Thonburi.

And at the end of our little Bangkok stay we are getting to the Kao Lak Road that has been known with the hippie backpacking crowed forever and became hyper famous by the film “The Beach” with Leonardo de Caprio and my darling Tilda Swinton. It’s ironic that the formerly most off the beaten tracks individual backpacker road became a heavy touristy point with all sorts of stores and bars and Ronald McDonald putting his hands together in a prayer. Nuff said?!

You’ll find all the wonderful places mentioned in this post on this map:

Do you want to read about all the other beautiful places I’ve visited in Thailand? Then go to the main post and take your pick!

Here are more pins from Asia for you

One Reply to “BANGKOK – more than just one night”