The island of Korčula is much less known and popular as many of its sisters although with over 15,000 inhabitants it is the second most populous Adriatic island. However, in the West, the town of Vela Luka, arranged around a half moon shaped bay, grants total relaxation while Korčula town presents a breathtaking historic old town within fairy tale like fortress walls.

Korčula used to be a pretty important spot in her days: Not only came the timber for the wooden walls of Venice from here, it had also been one of the most important harbors to the Venetian fleets.

Just like Cres, Korčula, too, is the name of the island and of a town.

Coming from Split, the first harbor you reach, though, is Vela Luka, a town with 4,000 inhabitants, nestled in a half-moon shaped bay on the island’s western side.

The many indented coves along the crystal clear waters make it sunbathers’ and swimmers’ paradise.

Because of the lush vegetation along the bay, going for a pleasant walk or a sportive hike are great options on how to fill gaps between lazing on the rocks on the shores.

There is, for instance, the Vela Spila, the Big Cave, which it is one of the most important prehistoric caves in Europe. From the town center, it’s only about 2 miles, but you have to hike uphill.

To get more great view of this beautiful island, there is also the Hum Hill – about 2.5 miles southwest from the town center and the slope is twice as high as the one to Spila.

Everything around Vela Luka is just beautiful – so I guess the town itself doesn’t have to be. It’s basically one or two rows of houses along the shore. Only the part in the very center before you get to the harbor is somewhat scenic. Of course, there are supermarkets and restaurants and basically, everything you need; it’s just not that cute. Actually, it’s much less pretty and charming than most other places I’ve been in Croatia; and, however, I do recommend it since there is no nicer and calmer place for a couple of lazy dayz.

However, it might be difficult for people who are not so fit or with small children since climbing on the big rocks can a bit dangerous and there are lots of sea urchins in the water.

Besides the sumptuous landscape, another thing is really striking in Vela Luka, and that’s the many modern mosaics. They’ve been there since 1968 when the International Artist’s Meeting of Painters was held there.

Now Korčula – the city of Korčula – is a whole different story. From Vela Luka, you can get there a couple of times per day by bus – it takes about an hour and you’ll get to see the entire island.

Korčula – the city of Korčula – has an amazing historic old city surrounded by walls. The most spectacular feature is the layout of the streets in a herringbone pattern. This arrangement allows the air to circulate and protects at the same time against the strong winds blowing from the Adriatic sea.

The historic part is on a promontory and can be accessed over a wooden drawbridge from 1863.

Within the walls, there are all these cute narrow alleys, but also impressive structures such as St. Michael’s Church located right at the entrance on Trg Antuna i Stjepana Radića, restored in 1615 which is the reason for its Baroque appearance.

But there is also the Romanesque-Gothic Cathedral of St. Mark, built in the 15th century – just like the Saint Nikola monastery and the Franciscan monastery with a Venetian Gothic cloister.

But you don’t need to look for the most prominent houses since basically every building within the old walls is a jewel – like e.g. the Renaissance Palaces that can totally keep up with those in Venice or Florence.

Talking ’bout Venice – rumor has it that signore Marco Polo was born in Korčula in 1254. Together with his father and his uncle, he was one of the first Europeans to travel the Silk Road to China. Like I said, rumor has it, but there’s actually no proof.
Notwithstanding, the good people of Korčula would be crazy not gaining profit from this rumor, so they insist and you can even visit a building they claim to be Marko Polo’s house of birth.
I find it pretty unique that a municipality just decides having been some famous guy’s birth place – and upsadaisy – tourism flows.

By the way, to get the most scenic view of Korčula – the city of Korčula – I recommend to climb up to the very un-scenic supermarket at the town’s entrance. Take the elevator to the parking level and from there you’ll have the best view of the entire promontory and the marvelous sea and mountains in the backdrop.

So while Korčula – the city of Korčula – is much more beautiful than Vela Luka, I’d still recommend staying at latter. It’s far more relaxing, few tourists, hardly any day tripper, secluded coves and big trees that grant you shade – nothing but the noise of the noise of the cicadas, the gurgle of the sea and the lapping of the waves against the rocks.

From time to time, you hear one of the small boats chugging, then it’s just the pretty regular ripple of the water again. Twice a day, at one and then again at half past five, the ferry to Split slides by; this is rush hour in Vela Luka.

Location, location, location: Although it’s about twenty to thirty minutes walking to the harbor, I loved the location; and Jenny and her husband picked me up at the ferry on arrival and brought me to the bus to Dubrovnik as I left, anyway.

The nearest beach – that is not so nice and in front of a pretty busy hotel – is just across the street. But when you walk for about fifteen minutes along the lovely trail next to olive trees and cactusses and through tunnels of greenery, you’ll get to paradisiac spots where you are all by yourself.

Actually, I must admit that the best place to eat for me was at the apartman: I enjoyed doing a little Croatian grocery shopping and doing my own cooking at the well equipped kitchen.

Here is how I prepared coffee since I wasn’t able to buy coffee filters at any of the local supermarkets:

Do you want to read about all the other beautiful places I’ve visited in Croatia?
Then go to the main post and take your pick! 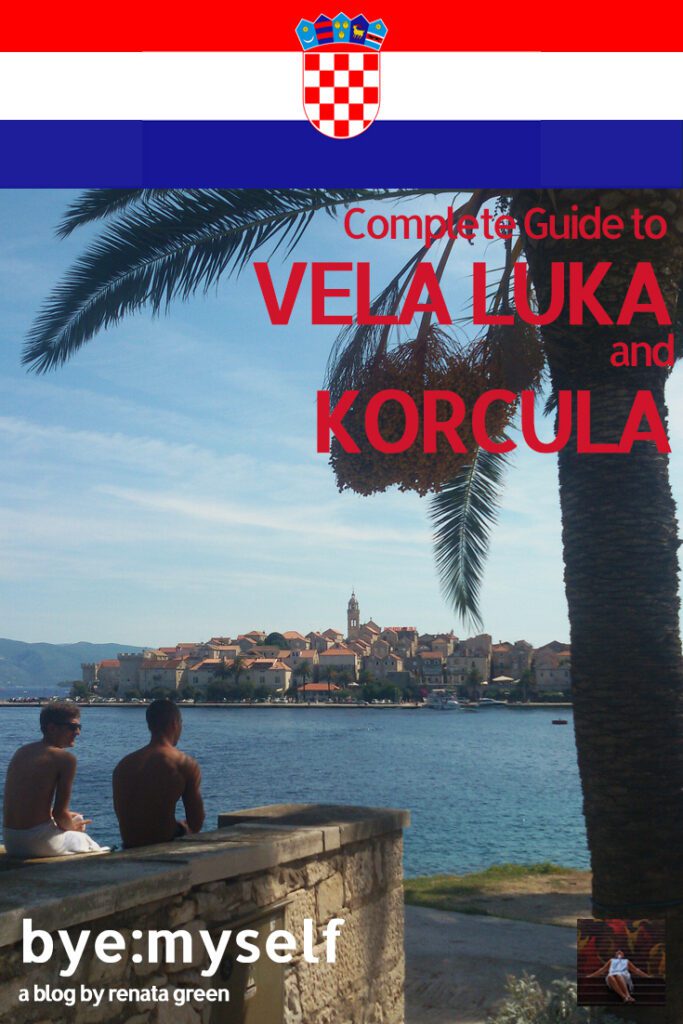 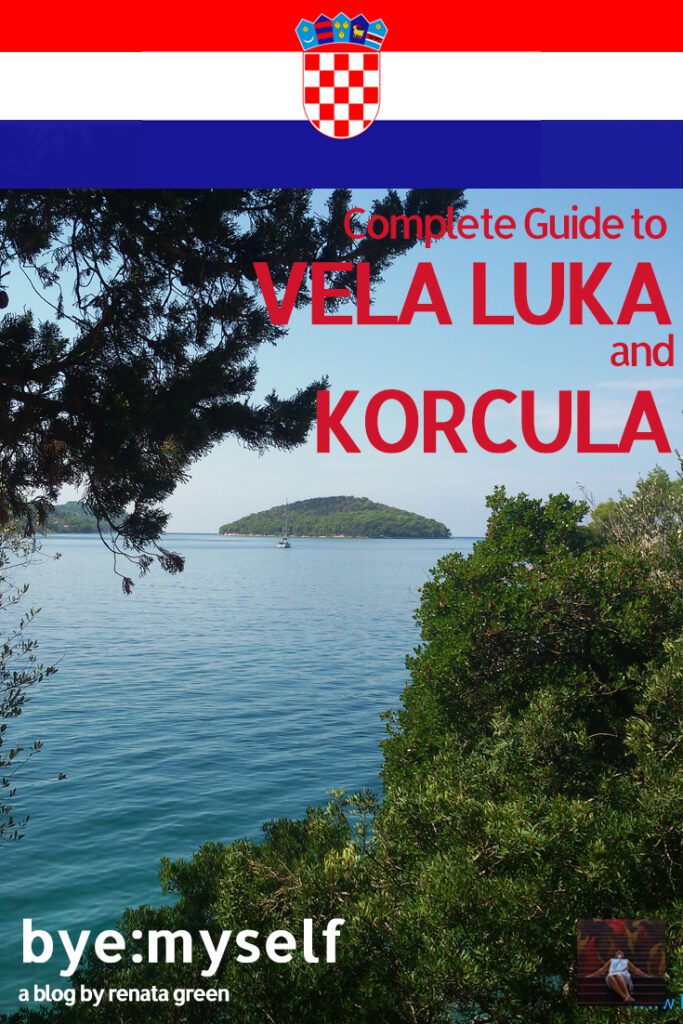