“The model city of Brazil” – that’s what my Portuguese teacher Marcy had called Curitiba. And although this town, home to almost 2 million people which makes it Brazil’s eighth largest city, is not really spectacular, it’s worth the visit. It has lush parks, a well maintained historic center, modern buildings such as the Museu Oscar Niemeyer, celebrating Brazil’s star-architect. Their bus system was exemplary for many other Latin American cities. And if all this does not impress you, go on a wonderful day trip and take the scenic train to Morretes.

Yes, Curitiba might not be famous and does not deem exciting at first sight, but you sure will have a great time here.

Curitiba was a pioneer city when it came to public transport, so it’s also easy to get there: There is a train station and right next to it an overland bus station, and of course they have an airport that’s easily accessible by a shuttle bus that goes about every twenty minutes from dawn till dusk.

A very convenient stop is at the Teatro Guaíra on the east side of the Praça Santos Andrade.

The Praça is not only a beautiful square with many sculptures of famous men – all facing the Universidade Federal do Paraná all the way across from the theatre, it is also a good point to start exploring the city center.

You can do it bye:yourself – or you can join the interesting and fun free guided tour. May I remind you – it’s called ‘free’ since you are not obliged to pay for it…hence, I cannot understand how people actually do not pay for it: these guides work for tips, guys!

Right behind the University is the Praça Generoso Marques with many buildings that show the tradition of immigration to Curitiba: Stores and restaurants founded by Germans and Lebanese and who not.

The nicest one is the Paço da Liberdade: Built between 1914 and 1916, it used to house the first town hall.

Later it was used for the collection of the Museu Paranese until it became a wonderful community center with space for different cultural activities, a computer room where everyone can go online for free, a library and a very charming coffee house.

At the back of the building, you’ll find yourself at another majestic square, the Praça Tiradentes with the Catedral Basílica Menor Nossa Senhora da Luz.

Walking right of the Cathedral, you’ll get to the Tv. Nestor de Castro. Here one of Curitiba’s stars, the artist Poty Lazzarotto created murals depicting scenes from the life in Curitiba and its surroundings.

Poty’s work is found all over Curitiba. While here he used colorful tiles for his images, he decorated the facade of the Teatro Guaíra in monochrome clay. However, his style can be immediately recognized.

A good option to get to see more of Curitiba is by Linha Turismo, basically a hop on hop off bus, only that you get five tickets so that you can re-board four times (which is enough for Curitiba, take it from me). The whole tour in one go takes about 2.5 hours.

Of course, there are also various art museums to be visited, the most famous one being the Museu Oscar Niemeyer, located in the Centro Civico district north of the city center. If you don’t mind walking, you can get there in about 20 minutes. Otherwise, there are many buses going from the center to the Centro Civico.

Oscar Niemeyer (1907 – 2012) is certainly one of world’s most important modern architects. He was friends with Le Corbusier and together they designed the UN-Headquarter in New York. Not only did Niemeyer design Brazil’s capital Brasilia, his buildings are also to be found in England, Italy, France, and many other places.

The museum, that’s of course designed by the master himself, houses an exhibition on his work in one gallery, but the rest shows changing temporary exhibitions.

Another iconic place not to be missed while in Curitiba is the Jardim Botanico, the botanic garden southeast of the city center.

While the garden will not overwhelm you with its variety of plants and flowers, the palm house has practically become the Logo of Curitiba – and you can take really nice pictures of the premises and the view of the city.

A day trip to Morretes, a town located 70 km / 44 mi east of Curitiba, is not to be missed. Actually – the journey is the reward, at least if you are taking the Serra Verde Express. This train, consisting of many different wagons, takes you during three hours through the most scenic landscape. Along the
Serra de Mar, the Atlantic rain forest and through the untouched, rugged mountain scenery. Steep slopes and high bridges – it’s like being on an old fashioned, extremely slow roller coaster.

After three hours – you think it cannot get any better – you arrive in picturesque Morretes, where already at the town’s entrance children greet the travellers by standing in front of their houses and waving. It is all so idyllic!

Once you arrive at the train station, to your right is an information window where you can ask the friendly lady for a map of Morretes. You probably won’t get lost without it, but I like knowing where I am and what it is that I’m seeing.

There are attractions at the outskirts to be reached by buses, but after three hours on the train I felt like walking – and the town of Morretes, which by the way has about 15,000 inhabitants, is such a cute little place.

Being located in the Serra da Graciosa, every corner you turn, you are overwhelmed by a majestic view!

There are the Paróquia Nossa Senhora do Porto and the Igreja de São Benedito, but there are lots and lots of cute little houses – many of which are restaurants or specialty shops.

The food is probably good everywhere since food is good everywhere in Brazil. However, I picked a restaurant that was not that centrally located since I wanted to go away from the crowds and tourist groups. They don’t have a website, but I can tell you that they are called Dois Chefs and are on the left-hand side when you’re going from the iron bridge towards the old graveyard – which is totally worth a visit, too.

As a souvenir, I decided to buy a variety of tiny Cachaça bottles of different flavors such as ginger, pineapple, passion fruit, mint, and some others.

There is one train going to Morretes at 8.15 and during high season another one at 9.15, but that one has only expensive, luxury seats.

There is a wide range of different tickets and packages: from a simple ticket for 95 R$ (29 US$) to a package including extra tours to Paranaguá or Antonina – both located on the banks of Baía de Paranaguá, the Paranaguá bay, that will cost you almost 500 R$ (more than 150 US$). But also the tickets to Morretes can go up to 360 R$ (110 US$). You are then seated in a nicer wagon with better seats, there is a bi-lingual guide and drinks like soft drinks and beer are included.

You find all these options on their website that is really good and clear. The process of booking, though, is terrible: You book and then you have to wait till they answer you to confirm.
According to their website, this can take up to seven days.
I booked two months ago and still have no answer.

Since I was quite frustrated with this booking process, I just got up pretty early in the morning to be at the station ahead of time.

At least in the cheapest wagon, they had still a lot of seats available – and it stayed quite empty during the whole trip.

It’s quite ironic: since most people either go on an organized tour that books seats at the more expensive wagons, the cheap ones stay basically empty. So you pay a fraction of what they pay and you have the wagon for yourself and you can move around according to the changing scenery.

Of course, you can also take the train to go back to Curitiba. But it’s far cheaper – about 22 R$ (less than 7 US$) and faster to go back by bus.

Since in Curitiba the bus station is next to the train station, I’d recommend you buy your return ticket right after you got your train ticket. This way you are all set and don’t have to worry that the bus might be full.

If you have the time, just go to the station one or two days before and arrange everything ahead – especially during the high season and the Brazilian school holidays.

Wanna read how I perceived these two pleasant places in Southern Brazil? Check out these lessons of my Class of Brazil series:

Class Of Brazil – 7th Lesson: Curitiba – and the Meaning of Means

Class of Brazil – 8th Lesson: Day Trip to Morretes – Planning On Not Planning

Do you want to read about all the other cool places I’ve visited in Brazil?
Then go to the main post and take your pick! 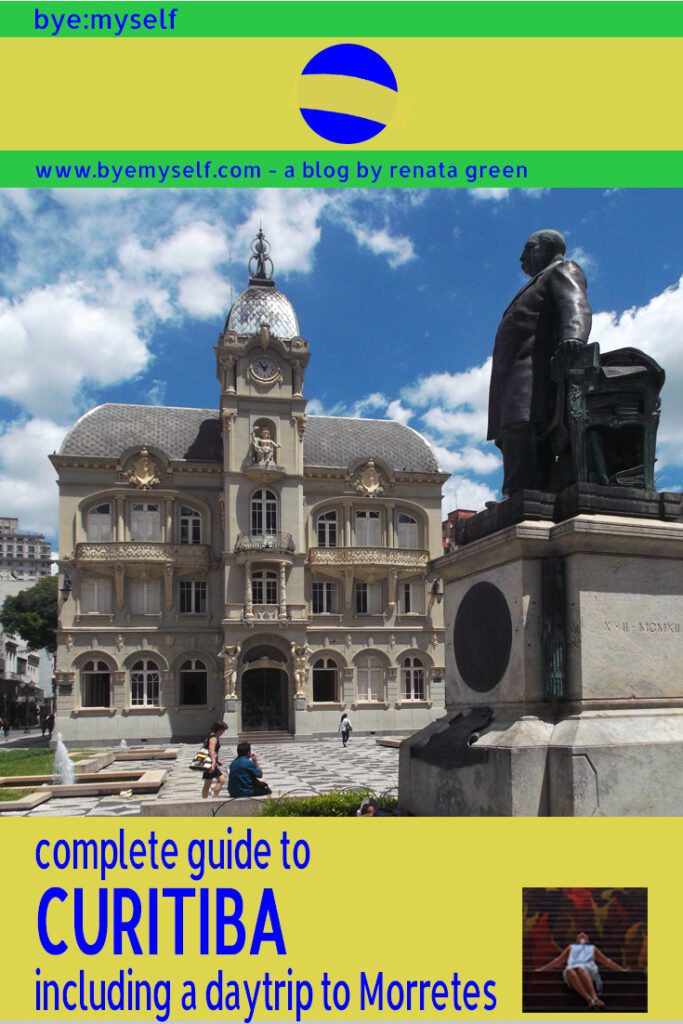 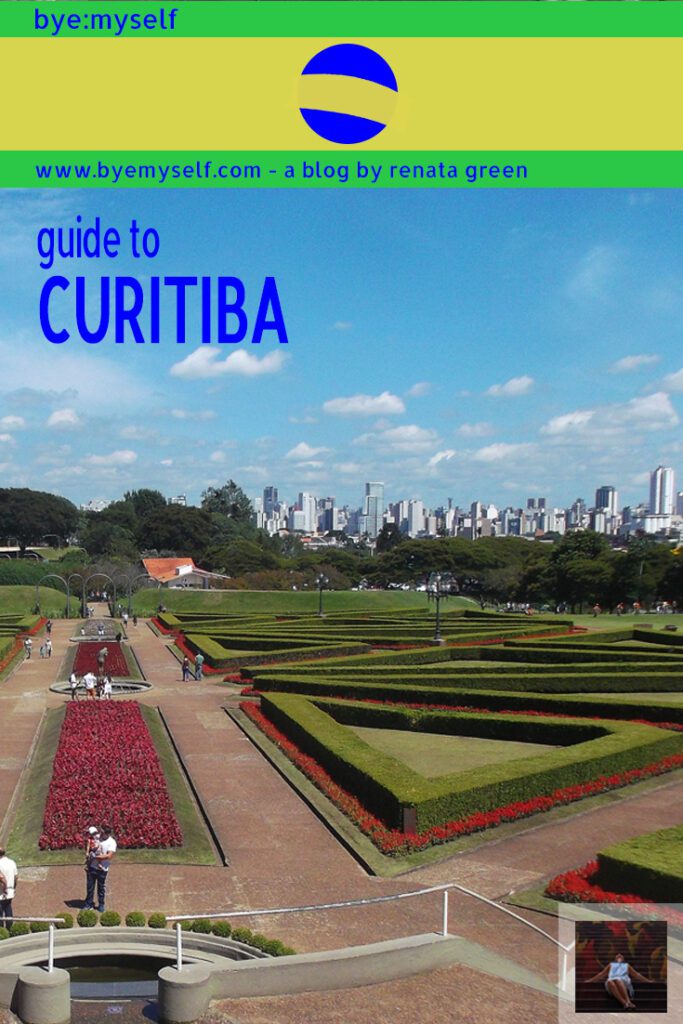 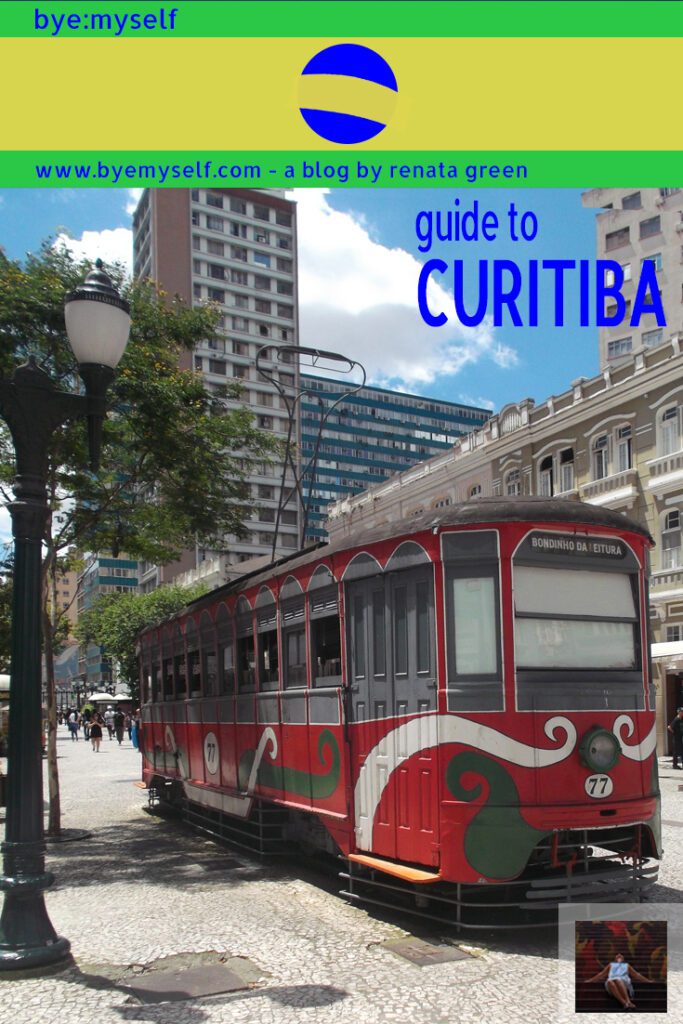 Here are more pins from Brazil for you