Another day, the same bus – we were going from the El Zaino entrance of the Parque Tayrona to Palomino.

The former fishermen’s village Palomino is located about 50 km further east so that the bus takes you there in about an hour. The is sort of booming; because it has one of Colombia’s nicest beaches and a river with a major fun factor.

Palomino is a slightly shabby village between a road and a nice stretch of beach, home to about 4,000 people and frequented mainly by the hippie-ish backpacker crowd. Thus there are many, many hostels – and if this is still too bourgeois for you, you can rent only a hammock for a handful of dollars.

You can hear the late Bob Marley at every corner. Rasta culture rules. It’s amazing how the relatively small island of Jamaica enriched hippiebackpackertourism all over the world.

So anyway, we didn’t come here to listen to the Rivers of Babylon, we came here to float down river Palomino. Although the village is mainly a beach location, it is at the same time on the foothills of the Sierra Nevada Mountains of Colombia, world’s highest coastal peak. Therefore, there is not only the ocean, there is also a river.

The good people of Palomino found a way to turn this river into a stream of gold: They offer floating down in lorry tires – great fun for young and old.

Everybody seems to be in the tubing business, there is a pile of lorry inner tubes in front of basically every house.

For a couple of pesos the owner hands you a tube and hires a young man on a motorbike for you and off you go.
It’s not very handy to carry a huge tube while riding a bike. Therefore they invented the technique of sliding the tube over both riders.

You get into the river somewhere in the jungle, the bike gets you there approximately halfway, then you have to walk for about half an hour on a very narrow and very steep mud trail.

Once you get to the river shore, you make yourself comfortable in the tube, you wiggle and giggle and shriek – that’s not the official part of the program, but everybody does – and off you float.

It’s great fun, but don’t think that you can just hang in there and let the mighty river do all the work! If you do that, you end up against rocks and in the bushes. There were co-tubers floating from bush to bush, but that’s only fun for others, and while the water has a suspicious appearance, at the shores it’s plain disgusting. I know that because I got there twice.
So what you have to do is to observe the course of the river and the rapids and navigate with your arms as quick and frantic as you can.

But there are also long smooth parts where you can relax and appreciate the mighty jungle with its numberless species of majestic trees. You can watch colorful birds sitting on branches above your head, from time to time diving to get something out of the water; which means there is something in the water, that’s attractive to birds. My butt is hanging in this water…
Anyway, it’s so beautiful and relaxing.
If you worry about safety: The danger, that you capsize because your bottom touches ground is in many parts bigger than drowning.
After approximately two hours – depending on your navigation skills – the fun is over and you reach the beach, i. e. a sandbank separating the river from the ocean.

There you can just leave the tire and jump into the crashing waves that are rather for surfers than for swimmers.
However, the beach of Palomino was my favorite in Colombia so spending at least two days here is absolutely worth it.

Places to sleep and places to eat:

Along the main dust street stretching about one mile from the principal road Troncal del Caribe to the beach are many guesthouses, cabanas, hostels, and nicer hotels to choose from.

Many of them have an adjacent restaurant and since it’s a bit hippie-ish, it’s easy to get vegetarian or even vegan food here.

There is no bank or ATM in Palomino. Best you bring enough pesos for your stay. You can also change US Dollars at some of the guest houses and restaurants, but you’ll probably get a worse exchange rate; which shouldn’t be that dramatic since you probably won’t need to change large amounts.

Do you want to read about all the other beautiful places I’ve visited in Colombia?
Then go to the main post and take your pick! 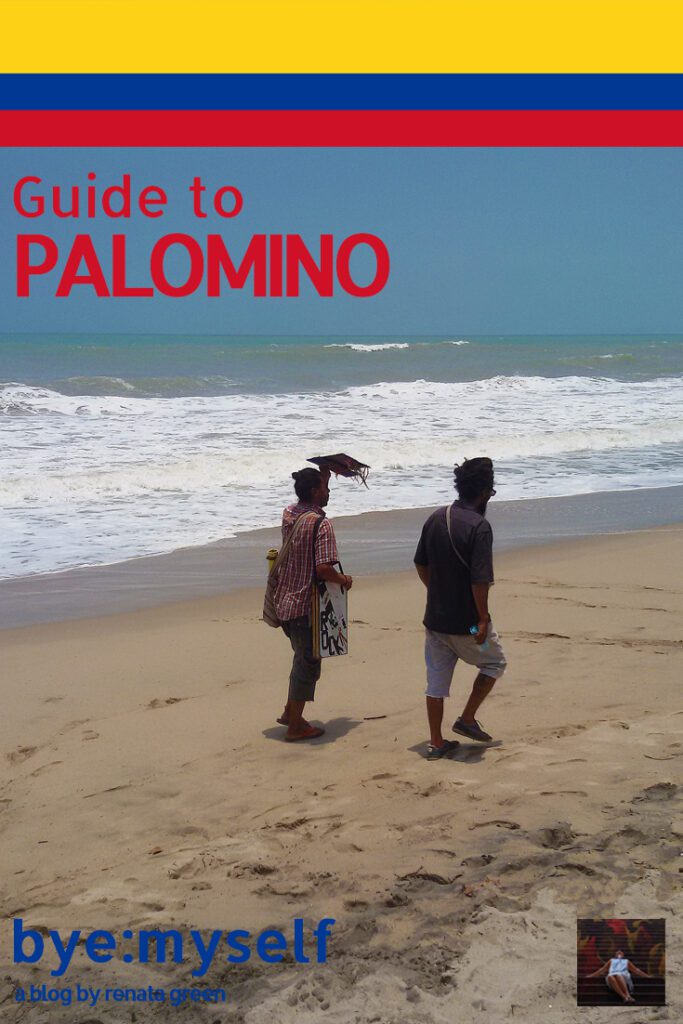