After Havana, almost everybody goes to Viñales, and everybody is right because it’s really beautiful and remained still fairly untouched.

Viñales has less than 30,000 inhabitants – many of whom live and work on small remote farms. Tourism, of course, has become a far more lucrative source of income, hence almost each one of the small, wooden, two storey houses has the famous Casa Particular sign out.

However, I’ve heard many stories of people who came to Viñales on the afternoon bus and had no reservation and had to either go back all the way to Havana or just spend the night in the park.
I haven’t witnessed anything like that, but I would say, reservation is recommendable.

Once you’re settled at your Casa Particular, you can enjoy the sumptuous landscape hiking or biking, or you can take the Transtur hop on hop off-bus for 5 CUC, which doesn’t really make sense since that way you miss all the tiny moments and glances on Cuban life which are one of Viñales’ strongest suites.

The best way to move around is on a bike. One can go West to see the Mural de la Prehistoria, but most importantly the tobacco fields, oxen and farmers – and of course the wonderful mogotes, high limestone cones. To see them like in a fairytale covered in mist, you have to get up really early in the morning – at six latest! But the sight will move you to tears!

If the lush landscape, the rolling hills, the picturesque mogotes, the lawns, and the fields are not enough greenery for you, they actually have a botanic garden. Coals to Newcastle, that’s all I can say.

On one of the mogotes live the aquaticos, an ancient sect. Unfortunately, it’s not so easy to find the right way uphill, and local people pester you that you cannot go alone and need a guide and that would cost only 8 CUC. It’s annoying. Maybe you want to agree on a tour with someone your Casa Particular recommends. That way, you probably still pay the 8 CUC but at least they spare you the pestering. Your host will also be able to arrange bike rental for you – this costs something like 10 to 12 CUC per day.

Note: Do not expect your host or people who you befriend to seriously negotiate a good price for you. Remember, you are a guest that will be parting tomorrow; their neighbor, colleague, friend or cousin will stay and due to the system based on scarcity, they depend on each other.I’ve heard tourists complain about that and being disenchanted that their new friend let the cab driver screw them over; I do understand their disappointment, but I think that neither of us can actually imagine how complex everyday life and relationships become in this economy of immense scarcity.

Going up North from the village center, you get to two caves, Cueva de San Miguel and Cueva del Indio, where a boatman navigates the visitors through the subterranean river. Next to the Cueva del Indio is the Rancho San Vicente, an idyllic, agricultural piece of land to be visited.

Unfortunately, also there was a young man who first insisted to guide me or rent me a horse, and then he wanted 3 CUC because I intended to climb up a national small forest. Only when I asked him to show me some sort of ID that he’s supposed to collect money, he backed off.

I met travellers who were extremely annoyed and repulsed by the constant cheating, the demanding money for no reason, charging far too much etc. One guy told me, he couldn’t sleep at night if he would charge triple of the real price like some Cubans do.

Although I was also tired of people taking advantage of me, I found his comment pretty ignorant and I think he strongly underestimates the hardship of life in Cuba. It’s certainly not ok how (some!) people try to get the maximum from the tourists, but people there hardly have a chance to make money, and I think that over the last decades they learned to grab whatever they can of fear that the next day they won’t be anything left. I saw a lady on the plane from Baracoa to Havana taking this little seat cover that’s under your head, you know, this little piece of cheap fabric they put on the seats. What for? I think the scarcity makes people grab whatever they reach – whether they need it or not.

We have it so easy to be honest. And don’t give me this “I have to work for my money, too”-crap – let’s get real: everybody going to Cuba at least has the money to….go to Cuba.

So I think it’s their right to try to screw me over, and it’s my right not to let them. Fair deal.

Talking ’bout deals: Viñales might also be a good place to buy some cigars – basically fresh from the field. Since I just wanted a small souvenir, I bought a pack of ten pieces at a small finca on the outward road to Havana. I cannot tell you anything about the quality, for me, it was just a souvenir. If you want to buy larger quantities of really good stuff – you have to confide in your host or buy the pricey, sealed stuff at official stores for a pretty high price.

Other souvenirs can be bought at the small, quite nice street market on Calle Ceferino Fernandez.

If you have enough time – which, unfortunately, I didn’t,  you should absolutely go to some of the nicest Cuban beaches from here – either  Cayo Jutías West of Viñales or Cayo Levisa in the East. On this isle, Cubans are not allowed – what I find vile- so you have to bring your passport to prove that you are not one of them; creapy’n’crappy.

This map should give you an idea where to go once you’re in Viñales:


Do you want to read about all the other beautiful places I’ve visited in Cuba?
Then go to the main post and take your pick! 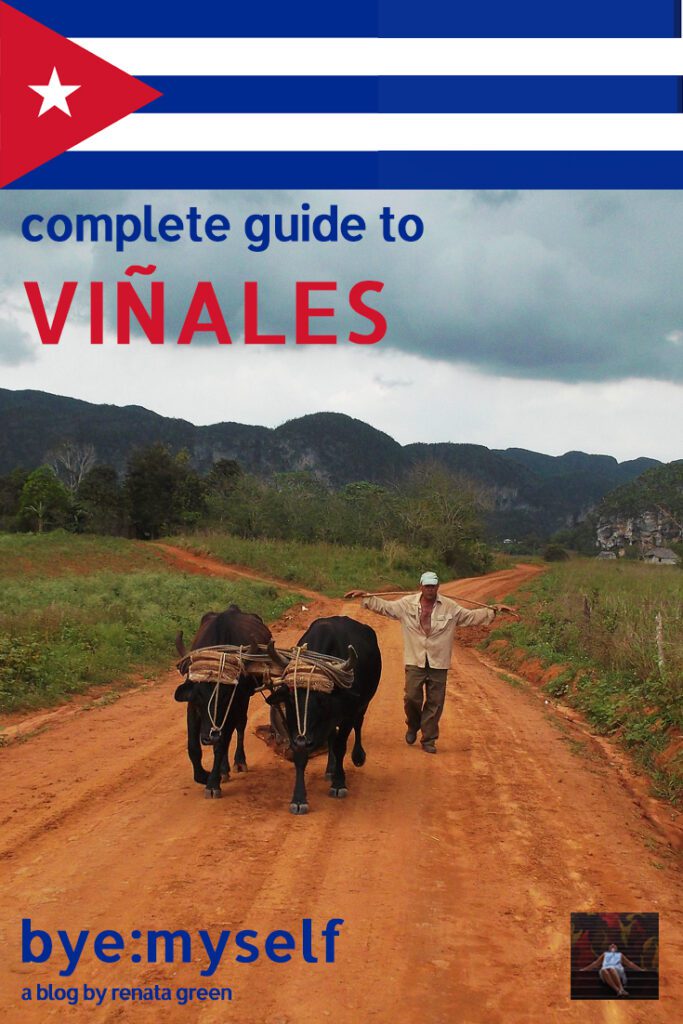