Split is one of these many Croatian cities that has it all: Rich history presented in a well-preserved, breathtakingly beautiful old town. Colorful farmers markets selling fresh produce to restaurants that prepare the most delish meals. Lush woods as well as nice beaches – and all that within the city limits. And a posh harbor – gateway to splendid destinations beyond the sea.

However, Split was yet another place I initially wanted to skip. I only got there to spend the night before travelling on to Korčula island. Hence one single day was enough to make me fall in deep love with this beautiful and so special place.

Split has about 200,000 inhabitants which makes it Croatia’s second largest city. Whether you get there by train, by bus, or by ferry – your tour will always start at the impressive harbor front opening to the Adriatic sea.

The part along the Obla kneza Domagoja is beautiful, but very busy: People are pushing and pulling their luggage from buses to ferries and cruise liners – it’s not very serene. It becomes far chicer as you turn left at the corner at the parking lot: Here is a pedestrian promenade – elegant like in the old times. All the big hotels and fancy restaurants have their tables and chairs on spacious terraces, you can hang out here for hours watching people and enjoying the breeze from the water.

As you get to the fountain Bajamontuše – you won’t miss it since there is always a group of people waiting to have their picture taken – turn right and walk up a couple of stairs to the Trg Republike. You will notice right away that it is inspired by Italian architecture since it resembles very much St. Mark’s Square in Venice.

Parallel to the square’s east part is the Marmontova ulica, a shopping street – quite narrow and lovely.

Following this street, you’ll get to the Trg Gaje Bulata. For one of the best views of Split and beyond, enter the Benetton store to your right, take the elevator all the way up to their rooftop café – and there you will see…literally. The coffee is good, the view is even better.

Once you’re back on street level, walk on Sinjska ulica to the Park Josipa Jurja Strossmayera. This is a place either to relax or to enjoy some nice museums like the Galerija Umjetnina, the Museum of Fine Art, or the Live Museum Split that presents scenes from the daily life of Roman citizens. Obviously, a place not to miss when visiting with kids.

Not far from the Museum of Fine Art is the statue of Gregory of Nin Grgur Ninski, Croatia’s bishop from 900 till 929. Due to his pose and his attire, I find he looks like a very angry magician.

Across from this obviously furious guy is the Golden Gate Zlatna Vrata – the main entrance to the 4th-century Roman stone entryway to Diocletian’s Palace, flanked by two fake Roman guards who are happy to have their picture taken with you.

The Diocletian’s Palace and the Old City Center

The Palace is an antique complex, built for Emperor Diocletian to be his retirement residence. The compound consisted of a Roman villa and palace constructions with military and urban formations as well as sacred architecture. The complex is walled, has four turrets and a couple of overhanging towers along the facade. The actual dimensions can be traced by the subterranean halls.

After the Roman epoch, it was remodeled to an inhabited fortress – constantly adapted to the needs of the different cultural customs – showing Split’s everchanging history, e. g. Diocletian’s was altered into a cathedral. Today, it forms the major part of Split’s old town on the UNESCO World Heritage List since 1979.

There is so much to see at the palace that I list only my favorite spots – and cannot recommend enough just walking around with your eyes wide open to see all the small, stunning details.

The Peristyle with the Sphinx

Peristyle was – and still is – the central square of the palace. The most important buildings here are the cathedral and the bell tower.

The Sphinx watching over the Peristyle is about 3500 old and amazingly well preserved.

The Cathedral with the bell tower

The Cathedral of St. Domnius is actually formed from the Imperial mausoleum. It can be visited – there are different tickets, some including the treasury and the bell tower.

I did not dare to climb it all the way up, but as you can see, even from the first floor, you have great views.

There are stairs leading down from the Peristyle to a subterranean market and to the Palace’s substructures. Actually, the brass gate opening to the Riva used to be the main entrance to the complex. These excavated subterranean remains can be visited.

Since this is one of the most touristy places in all of Croatia, you cannot expect the market holding great bargains for you, but the pieces made of semi-precious stones and rocks from the surrounding mountains are really nice.

This used to be the entrance to the residential area where only well-chosen visitors were allowed to meet the Emperor.

Since the Vestibule has fantastic acoustics, you might be lucky and enjoy a  traditional Dalmatian klapa group performing their old songs. Klapa has been part of the UNESCO Intangible Cultural Heritage of Humanity since 2012.

Nomen est omen: Since no two adults can walk next to each other, Let Me Pass is probably an often heard sentence in the….Let Me Pass Street.
It leads to the

This rectangular temple served to celebrate the Jupiter’s cult. It is built on an elevated podium with a six column porch in early Renaissance style.

Today, there is a sculpture of St John the Baptist at the baptistery.

The bell tower under the clock

The iron gate is opening to the west. In the eleventh century, a small church was built above the door.

The Narodni trg with the Old Town Hall

The Nrodni trg, in English People’s Square, was first mentioned in the 13th century. It was the first inhabited area outside the Diocletian Palace.

On this square, aka Pjaca, is the Gothic Old Town Hall from 1443 which was the seat of the city’s Today it is a museum.

For further, more extended information, I recommend a visit to the Muzej grada Splita and the Split Ethnographic Museum Etnografski Muzej Split.

I totally understand if there comes a moment where you’ve got enough of narrow alleys between old rocks.

Therefore I actually enjoyed staying about 20 minutes walk east of the historic center in a residential neighborhood with a large number of modern, trendy bars and restaurants – very non-touristy, very Croatian.

On the way, there are beaches like Bačvice, Ovčice, and Firule where you can spend lazy dayz – and wild party nights; at least on Bačvice.

A really tranquil place is the on Split’s very west tip Marjan Forest Park Park, the Šuma Marjan. Here you can go hiking and cycling and swimming – there is a beach here, too. But you can also visit landmarks and a couple of old churches – but wait, this was meant to get away from all the cultural treasures; hm, not so easy in Split.

Like I said, my apartman was located about 15 minutes walk from the harbor and 20 minutes to the old town. I liked staying in the area since it allowed me to see a less touristy, really Croatian part of town.
Besides, the young lady that let me in was not only breathtakingly beautiful but also as sweet as can be.

The apartman was one bedroom with a kitchenette and a pretty large bathroom.

On the main street from the harbor eastwards are many different restaurants and bars. I picked Movi and had some black, homemade noodles with a seafood sauce – it was a real feast.

They are open every day from 10 a. m. till midnight.

Do you want to read about all the other beautiful places I’ve visited in Croatia?
Then go to the main post and take your pick! 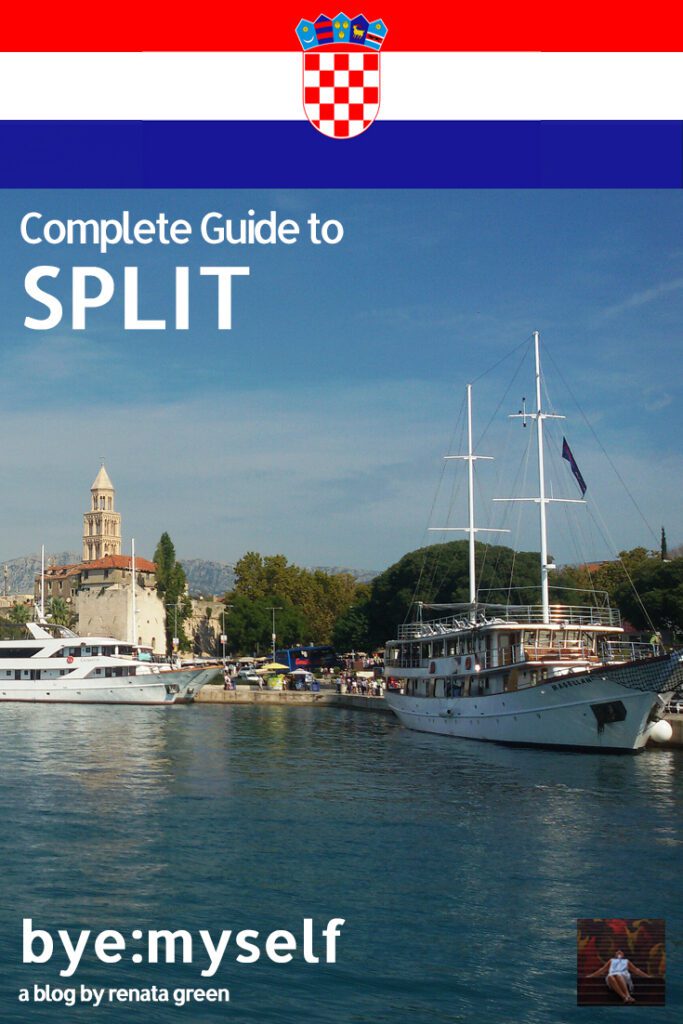 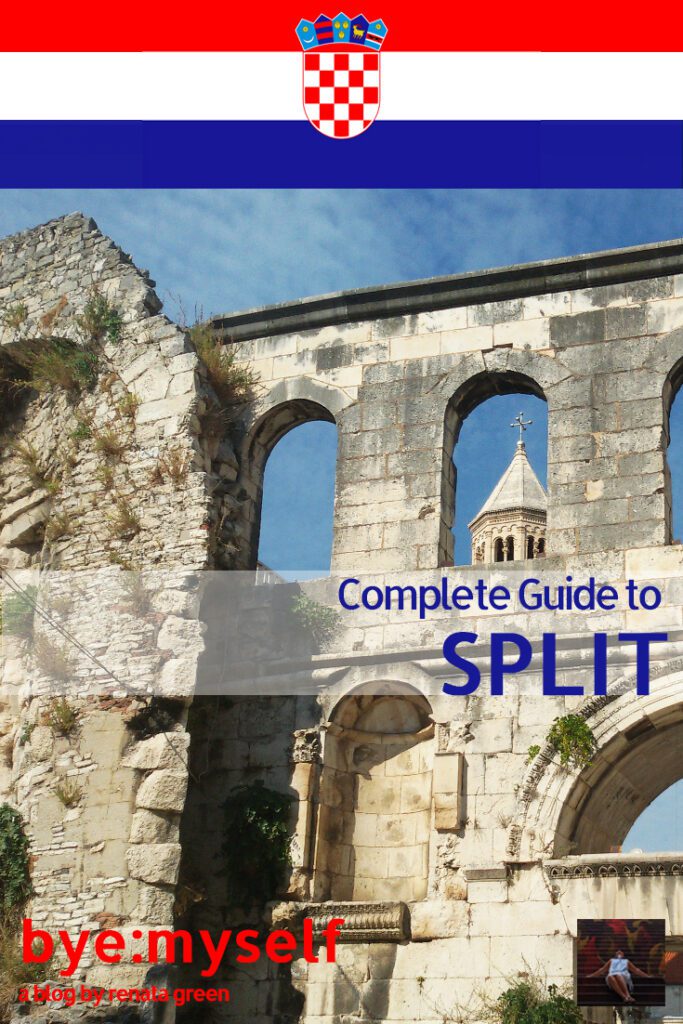