Cape Verde is often described as Africa light. Actually, it’s true that many places remind you rather of the Canary Islands than of an African country.

So although Cape Verde’s capital Praia is the most African city of them all, it has a familiar feel to it – with a dash of Caribbean vibes.

Santiago is the largest yet one of the least touristy ones of the Cape Verde islands. It has a quite fast-growing population of almost 300,000 inhabitants. About half of those people live in the capital city Praia – which, funny enough, translates to beach.

Arriving in Praia, the city should not be that overwhelming. It actually doesn’t deem overcrowded and hectic as other capital cities do. Especially the sophisticated Platô allows first steps into the region and softens the culture shock. It is Praia’s historic, administrative, financial, and cultural center of Praia, located uphill on a…plateau,

Praia does not have many classic tourist attractions to offer. However, I enjoyed the vibe a lot and felt very comfortable from the moment I set foot on the island.

There are colorful African markets. A smaller farmers market is right on the Platô. Then, there is the Mercado de Sucupira which is located behind the Platô on the lower level. This market is far bigger and much more vivid.

There is a handful of nice restaurants and bars around the center on the Platô.

It is certainly not recommendable to venture in the dark in the neighborhoods outside the Platô; and, as a matter of fact, they don’t have anything really overwhelming to offer to visitors.

Beaches Around a City Called Beach

Praia has a couple of beaches and they are like many city beaches: okay, but not really great. However, if you have only a little time and want to spend a couple of hours on the beach without any further ado, the best option is Praia Quebra Canela west of the lighthouse or the cozy Prainha, which translates to small beach and says it all.

If you want to enjoy nicer beaches, you should rather leave the city and to the northern shores. Take a minibus at the Mercado de Sucupira that will take you in about two hours to Tarrafal. However, we get to that later.

Actually, this is a trip everyone should take since you are crossing the entire island. This way, you get to see most of the interesting places such as…

Assomada has almost 14,000 inhabitants. This makes it – believe it or not – Cape Verde’s third-largest city – after Praia and Mindelo.

There is an inevitable market in the center – less bustling than those in Praia – founded in 1931. It is one of the largest on the island of Santiago, with a large variety of agricultural products and crafts.

Boa Entrada – The Gates to Beauty

Leaving the town towards the northern outskirts takes you to Boa Entrada.

As you walk down to the settlement, you can admire the Poilón, an old, huge Kapok tree, already from far.

An amazing experience is a hike through the Serra Malagueta. In this mountainous region, the Rebelados, rebels opposing the colonial occupants, used to hide and still live in their traditional way.

Since this hike, that takes an entire day, is not so very easy, you should make sure to go with a local guide.

From Assomada, you can take an Aluguer to the Serra village where the hike begins – or you just tell the minibus driver to drop you off there.

To continue to Tarrafal, the northernmost city, just take another bus at Assomada and off you go through the lush landscape of the Serra Malagueta to the left and right of the freeway.

Tarrafal is mainly famous for two things – a nice one and one that’s not nice at all:

About 1,5  kilometers resp. 1 mile before you reach Tarrafal’s city limits, west of the highway towards the Atlantic ocean is the istência. Shockingly, this former concentration camp was also referred to as Campo da Morte Lenta which translates to Camp of the Slow Death.

This prison camp was established by the Portuguese dictator António de Oliveira Salazar to imprison opponents to Portugal’s right-wing totalitarian regime. It actually followed the concept of the concentration camps in WWII.

Due to national and international pressure, the camp was closed in 1954. Sadly, in 1961, Adriano Moreira, the Minister of the Overseas Provinces, ordered to reopen it. It now became a forced labor camp for Africans from Portuguese colonies opposing the country’s colonialism.

Luckily, after Cape Verde’s independence in 1975, it was definitively closed and is today a memorial and a museum.

Life is a Beach

But I still owe you the nice thing that Tarrafal is known for and that would be the beach.

It is located in the north of the town – a very natural yet clean stretch of sand, overtowered by a couple of nice restaurants.

While I loved the islands a big deal, I was surprised how boring the food was.

However, one of the best places I ate at during my whole trip was the restaurant Baia Verde above the beach of Tarrafal.

A different bus takes you in about half an hour from Praia to Cidade Velha, since 2005 officially called Ribeira Grande de Santiago, where Cape Verde’s horrific history can be traced back.

Mind you, the atoll was uninhabited until in 1461 the good people from Portugal came and eventually started the slave trade between 1500 and 1620.

The island – notably Ribeira Grande – functioned as a cruel stopover where the kidnapped Africans were trained: Obviously, this means that those poor people were broken to become compliant slaves. Eventually, they were shipped to the New World.

Since June 2009 Cidade Velha is on the Unesco World Heritage List, thus the terrible Pelourinho – which translates to pillar – is still standing in the village’s center – now as a memorial.

It’s absolutely not worth it to do any of these trips on an organized tour since the minibusses go permanently and you certainly won’t get stuck.

All the international charter flights are going to the island of Sal or at least Boa Vista. However, Santiago is the main island so that regular international flight for instance from Lisbon are coming into the Nelson Mandela International Airport in Cape Verde’s capital Praia.

From there, you can get uptown by cab. I’m writing it like this since the airport is on the city’s lower level while the real city center is on the so-called Platô, the historic, administrative, financial, and cultural center of Praia.

Once in Cape Verde, the most convenient way to travel from island to island is, obviously, flying. At this moment, the best option seems to be going by Binter, a Spanish airline serving mainly the Canary Islands, but also other destination in that region, i. e. also North and Northwest Africa.

However, not every island has an airport, hence, there are ferries connecting all the islands.

You can check the ferry schedule on their website, but stay flexible and avoid at any cost tight schedules at the end of your stay when you depend on reliable transport to an international airport.

There is a good system of public transportation on Santiago. Mini-busses are cruising around the centers of the cities such as Praia, Assomada, or Tarrafal until they find enough passengers – and then off they race!

During the day, busses are plenty so you shouldn’t get stuck if you go on a day trip.

Since I wanted to stay close to the action – whatever this means in sleepy Praia – I chose to stay on the Platô.

But again: Cape Verde is not a very cheap country to travel – hotel prices are generally about the same as in Southern Europe.

Especially if you arrive late at the airport – or port – of Praia, make sure that your accommodation sends a taxi to pick you up. I don’t want to make you paranoid, but better safe than sorry.

You can look for accommodation here*

Honestly, besides the restaurant in Tarrafal that I’m mentioning above, I cannot really recommend an eatery. However, I recommend being a bit careful of what you are touching and what you are eating.

I was just blown away by the number of flies that are everywhere – and move from anything to everything.

Actually, Cape Verde was the only place of all my trips where I got really, really sick.

Another remnant from the Portuguese colonial times is the name of the local currency Escudo respectively Escudo de Cabo Verde, abbreviated CVE. This used to be how they called the Portuguese currency before the installment of the €uro. For 1 US$ you get 100,01 CVE, for a €uro 110,27 CVE (as per January 2020). You can check the current rate here.

Credit cards are not as widely accepted as e. g. in Europe or Asia, even some small guest houses do take only cash. Some businesses add a small percentage if you pay by credit card – which can become a quite high amount if you pay for instance for a couple of nights at a hotel.

There are ATMs on the Island of Santiago so that you won’t have a problem getting cash.

Some businesses even accept €uros. Since I didn’t pay with €uros, I cannot tell you if you pay a hidden surcharge.

As Cape Verde used to be a Portuguese colony, the official language is Portuguese, but people speaks krioulo. This is a local patois and, like many dialects, differs a tiny bit even from island to island.

Do you want to read about all the other beautiful islands I’ve visited in Cape Verde? Then go to the main post and take your pick! 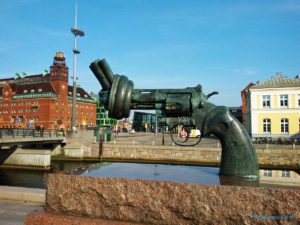 Guide to MALMÖ – a city in search of 24 more nations

The Island of BORKUM – West of East Frisia

The Island of HELIGOLAND – soft spot with rough edges

The Island of FÖHR – every village a home

A VAN-TASTIC TRIP to the ISLAND of FEHMARN

* This is an affiliate link. By clicking through this page, not only do you get the best rate, I only earn a small commission that helps me run this blog. Thank you so much for supporting me!